"Have you ever tried shawarma...I don't know what it is, but I know I want to try it." This was one of the ending lines of the first Avengers films. That particular scene takes place in NYC.

Although I've lived my whole live in and around NYC, I too had never had shawarma up until this point. What made that line so funny at the end of the movie was its complete randomness.

That and the word shawarma is a pretty interesting sounding word as well, which added to the comedic value of that scene. I can't think of too many foods that would have sounded that funny at that moment in the movie.

Without needing to save the world, I picked up this bag on a whim since it was something that I had not previously seen before. Well, I've never had shawarma before, but now I know I really like it. In my pound and a half bag of pre-marinaded meat, I got three skinless chicken thighs.

If I had to criticize one thing, it's that these should probably be cut into something closer to a kabob sized slices. Some areas of the thighs were quite thick, others were quite thin. If you are willing to be careful with your knife I would advise you to try to get these to a more even thickness.

Most often, shawarma is prepared on a spit. Not exactly what most home cooks would have access to. None the less, I reached for my cast iron skillet to give these a good sear.

The more of a crust these developed, the tastier they were. Perhaps the heat from cooking it over high heat was releasing the spices. Now, they don't exactly tell you what spices they might have used, but I can tell you that turmeric is certainly one.

My pan was undoubtedly more yellow that when it started. There was a bit of heat but a lot of nice familiar flavors too.

Now, serving this can be done in the same way that gyro can be served: on a plate or perhaps as a sandwich. I used what I had and used a Trader Joe's Garlic Naan. With that I had some lettuce, tomatoes, cucumbers, and some homemade shawarma sauce.

For $6.82 or $4.49 per pound this was easy as can be. The more of a crust you get on these the better. When I do buy these again, I'll just invest the time into a bit of knife work. I'm sure the oven directions will result in a nice chicken as well. But for me, there is something about the taste of seared meat that can't quite be replicated in the oven.

Would I buy this again? Oh yes, Trader Joe's Shawarma Chicken Thighs are probably going to be a regular purchase. They are very different from their other chicken options. With the right sides it made for a delightful meal. 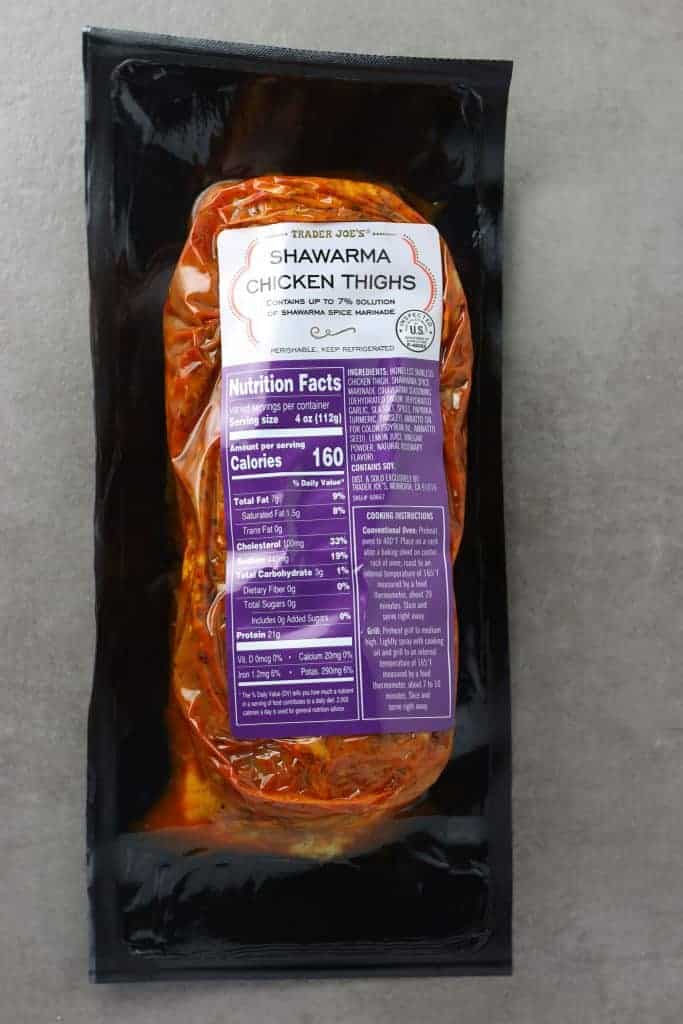 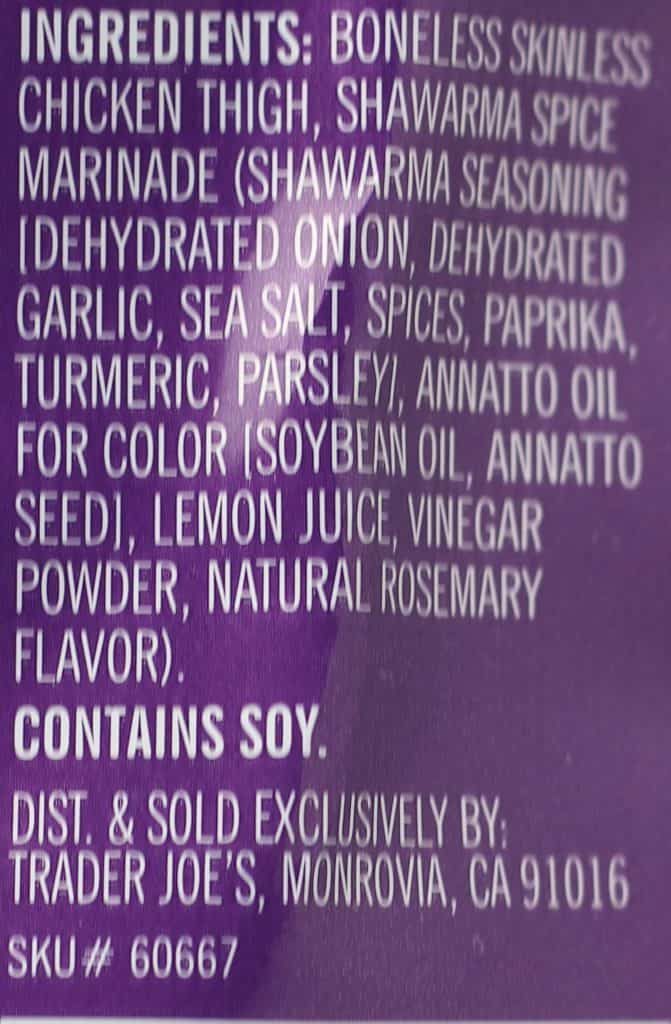 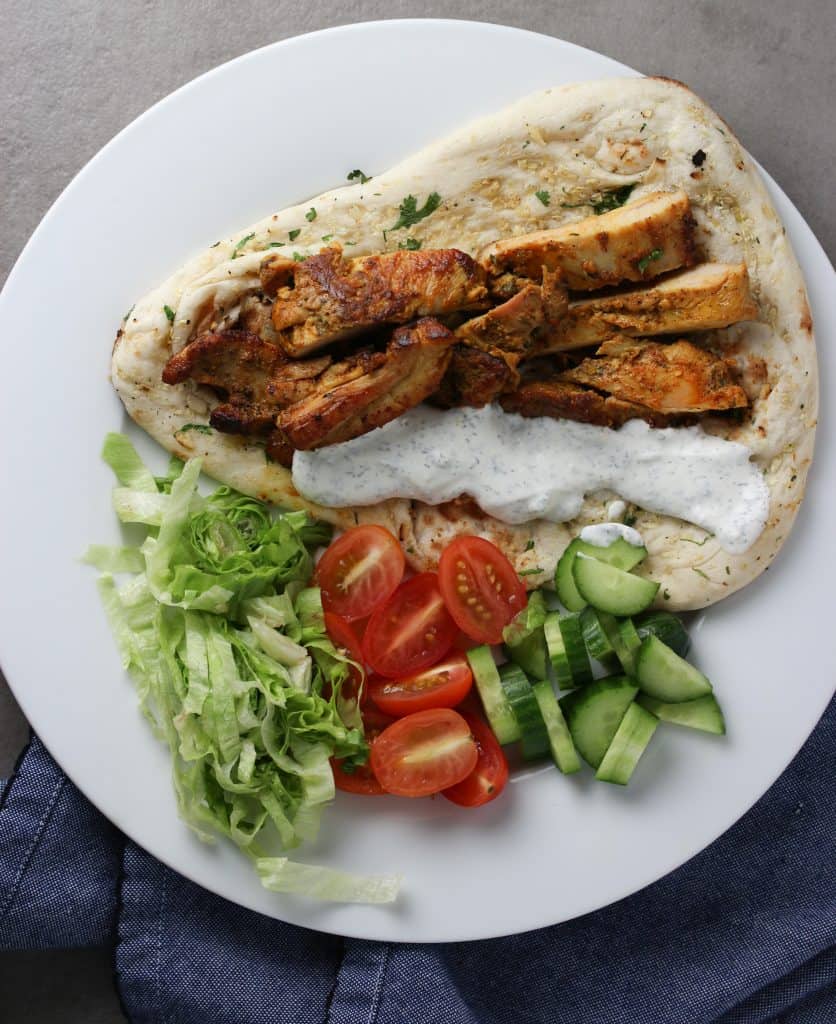 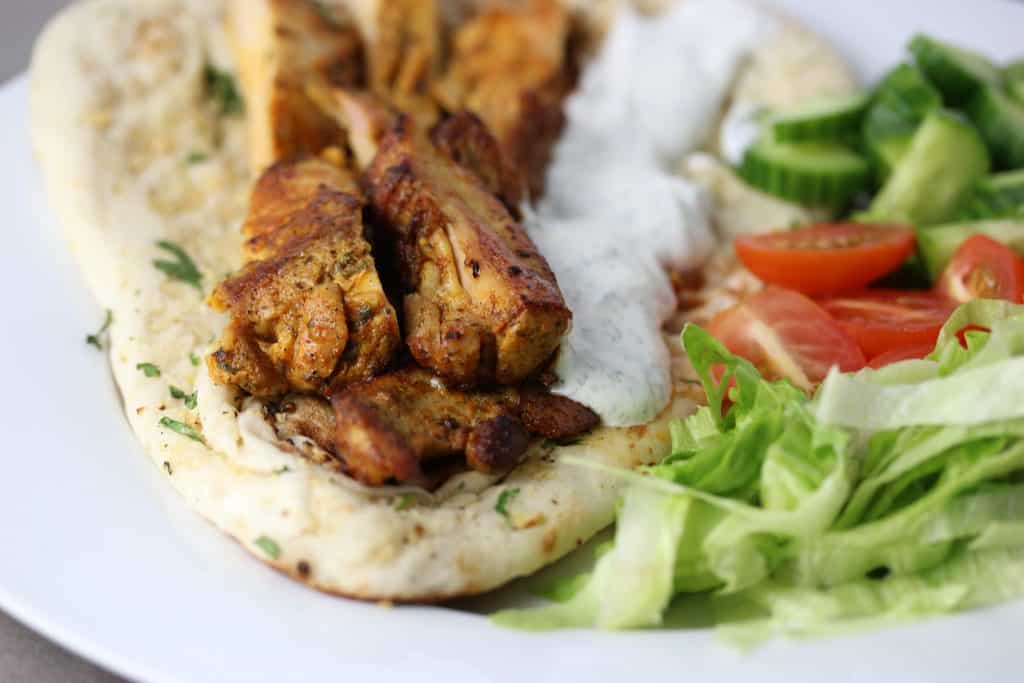 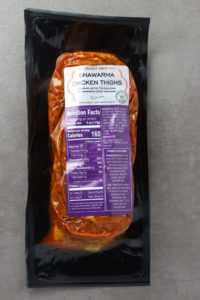 Trader Joe's Shawarma Chicken Thighs are a gem in the refrigerated aisle.