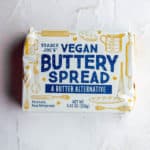 If you've noticed Miyoko's Vegan Butter hasn't been well-stocked lately, then maybe we have an answer for that. Trader Joe's is now making their own buttery spread for $3.99.

Table of Contents hide
1 The taste
2 The packaging
3 Overall
4 A visual rundown of this product
5 The Bottom Line
5.1 Trader Joe's Vegan Buttery Spread
5.2 User Review
5.3 Like this:
5.4 Related

The first time I had Miyoko's Vegan Butter I was a bit suspicious how it could possibly taste like butter. I tried it and realized that other than the color it was pretty spot on in terms of taste and texture.

In fact, in a blind test, I would be hard-pressed to tell which is which. Now, let's see how Trader Joe's Vegan Buttery Spread compares to that shelf staple.

Color- Miyokos tends to be an off-white color. Trader Joe's went that extra step to make it look like butter too. The color here isn't from turmeric but rather beta carotene.

Texture- I wasn't missing any mouthfeel with either of these products. These are both excellent butter substitutes and there is so little that would lead you to believe they weren't butter. And when I say that since they aren't quite as hard as a stick of butter would be out of the refrigerator both are more comparable to margarine. Not a big deal but a small thing you might notice.

Taste- Now for the all-important detail. They both are very much like the real thing. I had mine on a toasted bagel. And I was pleasantly surprised. It had the look, the taste, and the mouthful all without the dairy.

Spreadability- Trader Joe's is softer than Miyokos out of the refrigerator. Not a big deal but it did make it easier for spreading on. my bagel.

So if you are in the market for non-dairy or vegan butter then this product is solid. But overall, don't think that Trader Joe's is white labeling Miyokos. There are still have some substantial differences between the two.

This is basic butter packaging. No cardboard on the outside. It's packaged the way regular butter would be. However, unlike butter, there are no units of measurement.

So while the package mentions you can use it as a 1:1 substitute for butter, those little lines to help the home cook measure would have been a nice addition to the packaging but weren't there.

Trader Joe's Vegan Buttery Spread is priced in line with other vegan butter. Vegan butter is a better value at Trader Joe's than many mass-market grocery stores as well.

If you buy vegan butter this is pretty good.

Would I buy this again? 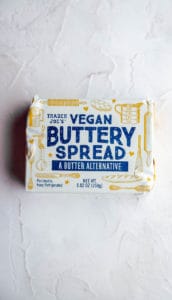