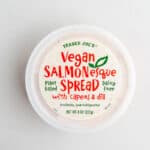 I'm not going to lie to anyone. When I saw this I was skeptical. I didn't know how I really felt about something that is usually so non-vegan. But I threw Trader Joe's Vegan Salmonesque Spread in my cart fully expecting to try it, hate it, and throw it away. This might even have some doubters surprised, including yours truly.

Once in a while I go into a product figuring I'm not going to like something. Lox, cream cheese on a bagel with capers, and red onions are one of my favorites. But to see "plant-based" and vegan on such a thing seemed kinda crazy.

I opened both dips I purchased when I got home and this was a big surprise. So plant-based dairy still has a way to go, I was still more concerned about the idea of vegan salmon.

So keeping in mind this is a dip, this is thick like regular sour cream but actually made from vegan cream cheese and mayo. This is absolutely a bit tangier because there is lemon juice along with the brine from the capers. But there were small chunks of vegan salmon that were basically spot on in terms of texture. I didn't miss the bite of actual fish because the taste seemed pretty close.

The dill is there but for me, it was on the back end as the capers and other acidic flavors were the primary notes here.

But, could you sub this out on a bagel? This dip is thick enough. Is it a full replacement for lox and bagels? No, this isn't meaty enough.

As someone who isn't vegan, this is a pretty good alternative. It's a little brinier and acidic than I would like and I would have liked a bit more of the creamy flavor to come through (along with some extra vegan salmon).

But I did walk away from this absolutely impressed with how good this plant-based alternative actually is.

Trader Joe's Vegan Salmonesque Spread is packaged in the same fashion that other dips are. This is in a plastic container with a thin layer of protective plastic over the top.

Trader Joe's Vegan Salmonesque Spread is a refrigerated item and can only be purchased in stores at Trader Joe's.

Would I buy this again? To my surprise, yes, I would buy Trader Joe's Vegan Salmonesque Spread 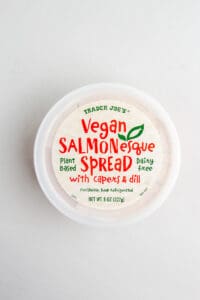 Product Description: Trader Joe's Vegan Salmonesque Spread is new and is not labeled as a holiday item.