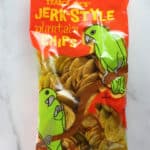 Oh Trader Joe's...how 2019 has become the year of the snack food on shelves. But you see, Trader Joe's Jerk Style Plantain Chips are different. We've now officially elevated the snack into something completely delicious.

Most of the time when I bring home snacks from Trader Joe's, my husband leaves them alone. Either they are too adventurous for him or they aren't a flavor profile he would like. Fortunately, I did the photography within moments of walking in the door.

Because I found this same bag with 10 plantain chips rolled up in a corner as if he were hiding it from me. Yes, part of married life is hiding the good snacks from your spouse.

After realizing that he had polished off the vast majority of the bag in less than 12 hours from me bringing it home, I figured I had to see what all the hype was about.

The hype is real.

If you like spice and heat, then here is a snack for you. This is one of those rare bags where they don't just lump all the spices together in the ingredients list as: "spices." Nope, they actually spell it out for you.

If you are unfamiliar with the flavors of jerk seasoning then it is pretty much everything the bag lists: all spice, black pepper, cinnamon, coriander, red pepper, and thyme. But if that weren't enough, you also have garlic and onion powders rounding out the flavor profile.

Each chip is crisp and is thicker than a potato chip. The plantain is a perfect carrier for this spice mixture.

When I asked my husband how he liked the chips, he described them as "awesome." Words he doesn't use often. Best of all, aside from snacking on these, he mentioned that he put some on his black bean and cheese burrito. To which I suddenly felt astonished that he had gotten that culinarily adventurous.

But also, it was seemingly brilliant at the same time.

Here is some untapped potential in these chips to be added to salads, burritos, they might even be good in other ways as well.

But for $1.79 these are affordable, delicious, and very well done. Probably not a nutritional necessity, but if you find yourself snack-ish, then these are a solid buy.

These aren't the only jerk seasoned item on shelves. Usually we see the return of Trader Joe's Grilled Jerk Chicken Thigh Skewers on shelves.

Overall, if you can handle a mild to medium heat, then this is a solid buy. 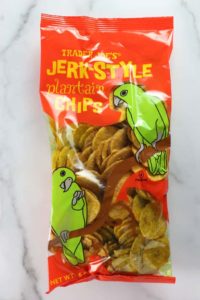