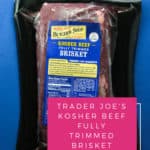 Brisket is absolutely delightful when cooked correctly. The problem is a lot of people can be intimidated by it and pass up a really good piece of meat. I can tell you this meat is pretty delicious.

If you are heat sensitive then this is not the week for you. With no end to the heat, this brisket was sitting in my refrigerator just waiting to be cooked.

I did turn the oven on as we have air conditioning. I needed to know how this is and if the directions are spot on. So rather than try one product at a time, I ended up trying two items at once. This brisket and Trader Joe's BBQ Seasoning and Rub.

Well, the directions will yield a cooked brisket. However, if you have dreams of Pit Master level BBQ there is probably no way they are cooking it that high for that short of a period of time. Low and slow is the mantra with this cut of meat.

There is a lot of connective tissue on this cut. While you won't need to break out a knife to trim this, you'll want to take caution how you cook it.

I was swayed by another blogger, Judie from Adventures of Dorrie Anne who told me about a magical device called an Instant Pot which can replace a half-dozen separate items I already own. I got one from my husband this past Christmas.

He did ask me what I needed another kitchen gadget for. I explained to him that he is never the loser when I get a new kitchen toy.

There has been no going back since. In fact, it proved itself most notably this past St. Patrick's Day with our corned beef. In about 40 minutes it was more tender than in previous years when it was simmered on a stovetop. The only effort on our part this year was a good rinsing of the seasoning and a bottle of beer. Then time worked its magic with minimal meat shrinkage to boot.

After trying the brisket, which was quite moist from the oven the leftovers went into the refrigerator. I was a bit unsatisfied with the texture after 2 ½ hours in the oven. It wasn't quite the texture I was hoping for.

Into the Instant Pot it went. In 20 minutes of high pressure with a bit of added water, it was the texture that did not require a knife. It was tender as can be. The way a brisket should be.

The following are some recipe ideas to help you make a better brisket plus most of these use different cooking methods depending on what you have available:

For $10.49  per pound of $28.64 for my slab of meat, it wasn't cheap. But it with the right treatment this is a fairly priced item that only requires you to put the seasoning on it. A great item if you can cook it slowly.

Would I buy this again? Yes, I would buy Trader Joe's Kosher Beef Fully Trimmed Brisket again, but next time I would make it entirely in the Instant Pot. The oven directions were just ok.

Food handling and the ingredient:

After being oven cooked and coated in Trader Joe's BBQ Rub and Seasoning with Coffee and Garlic you get: 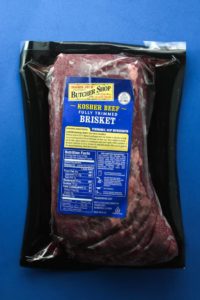 Product Description: Trader Joe's Kosher Beef Fully Trimmed Brisket is one of the larger cuts of beef available for purchase.

Trader Joe's Kosher Beef Fully Trimmed Brisket is one of the larger cuts of meat available at Trader Joe's.