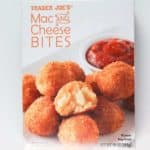 Is there anything more comforting than Mac and Cheese? I didn't think so until I ate Trader Joe's Mac and Cheese Bites. How can Mac and Cheese be made better? Clearly, the answer is breading them and frying them. This is another item from the freezer section, but I would keep this to a crowd-pleasing appetizer or snack.

If you are new to Trader Joe's then this product might seem new. In fact, this item was on shelves previously and the last time I reviewed this item it was 2016.

Just so you know, when Trader Joe's changes packaging it does mean that there is something different. Just this very week we saw the return of the much-missed taco sauce. And yes, there were packaging changes on that as well.

But no matter, this product is both new and improved.

First off, these keep their shape far better than the original mac and cheese bites. The original bites either leaked or became a bit flat like a souffle coming out of the oven.

But these are surrounded by a panko-like bread crumb which is a nice contrast to the soft mac and cheese center.

The mac and cheese taste like a little bite of the Diner Mac and Cheese but a bit creamier because this has cream cheese, Monterey Jack, and Pecorino Romano added for good measure. Now with all that cheesy flavor, the cheese does get a bit muddled together and is hard to distinguish.

But nonetheless, despite the fact it hasn't been seen on shelves in years, it is a delicious item as an appetizer or quick dinner option.

These new Mac and Cheese bites are priced at $3.99 which is 30 cents more than the original.

Would I buy this again? Yes, I would buy Trader Joe's Mac and Cheese Bites again. They're back and they are legitimately better than they were the first time.

The box of Trader Joe's Mac and Cheese:

How to prepare this:

The description from the side of the box:

What comes out of the box:

The images and information below refers to the discontinued version of Mac and Cheese Bites:

Here is the nutritional info, in case you are trying to eat fried food responsibly:

When you open the package this stares back at you:

So no microwave with this. I wasn't willing to heat the oven (or the house to make ten mac and cheese bites) so I used the toaster oven. 425 is the temperature to preheat it to. Place the bites on an oven safe baking sheet with parchment to contain the mess:

Remove when heated through:

Place on paper towel to drain about 2-3 minutes. Slightly messy to get off of the paper towel but overall they kept their shape well:

Serve as an appetizer:

Or you can include a nice dipping sauce like marinara or hot wing sauce.

What are my thoughts on this? Trader Joe's Mac and Cheese Bites are awesome. Definitely would be a hit at a party as an appetizer or snack. They were fried, full of mac and cheese flavor even though some of them did spring a leak. Once cooled they were a hit in my household. 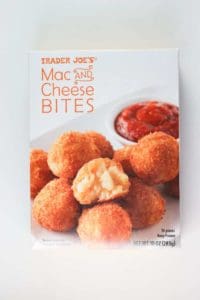 Trader Joe's Mac and Cheese Bites are back on freezer shelves.