The pros:  Trader Joe's Organic Tropical Fruit Blend is a tasty blend, especially if you aren't terrible creative with your morning smoothie.

The cons:  The bag should be resealable. The picture on the bag isn't the most accurate representation of the product. The bananas were not nearly as pretty as they were on the bag and when did strawberries become a "tropical" fruit?

The verdict:  Well, it's almost New Year's Day. Perhaps you have recently joined a gym, returned to the gym, or perhaps have committed to eating healthier. Over the month of December, I'm pretty sure I reviewed items that had me saying "Dia-be-tus." Likewise, I now refer to my physique as a "food blogger bod." Regardless, there is something about the holidays that makes me (and probably some others out there) throw in the towel of healthiness.

Well, I guess there are no excuses, but to be fair, I have been making a lot more smoothies than I have in the past. They have become my go to breakfast. Probably because I enjoy drinking them more than eating actual fruit. I know that sounds strange, but I embrace the more uniform sweetness. I know there are a ton of smoothie recipes out there, but this bag is like a recipe card on its own. I mix one cup of almond milk and one cup of fruit from this bag and I get a bright pink delightful smoothie with no thought involved.

I'm usually a zombie in the morning. My day starts some time in the 5AM region. At that hour, I have more in common with the Walking Dead than other humans. Worst of all, I'm on auto pilot. So breakfast needs to be thoughtless process. This bag requires no thought whatsoever. So while I use mine for smoothies, you can use it for any of the mentioned ways. Just don't expect it to be as pretty as the bag.

If you look closely at the bag, it's all freshly cut fruit. That's probably what this looked like before the freezing process took place. I'm also intrigued by the fact that strawberries are found in a tropical fruit blend. During the summer they can be grown in my home state of New York. However, in the depths of January, tropical is not a word I would use to describe what it feels like outside.

For $3.49 for a one pound bag this is priced at a bit of a premium. I'm pretty sure if I took the those individual frozen fruit bags that Trader Joe's sells and mixed them together I could make something far cheaper by the pound. While they don't sell frozen bananas, their bananas are relatively inexpensive. However, the truth still remains for me in the morning. I'm on autopilot and I want things as easy as can be. For me, equal parts fruit and almond milk will yield a nice thick smoothie that will get my morning going right. I'd buy this mix again. 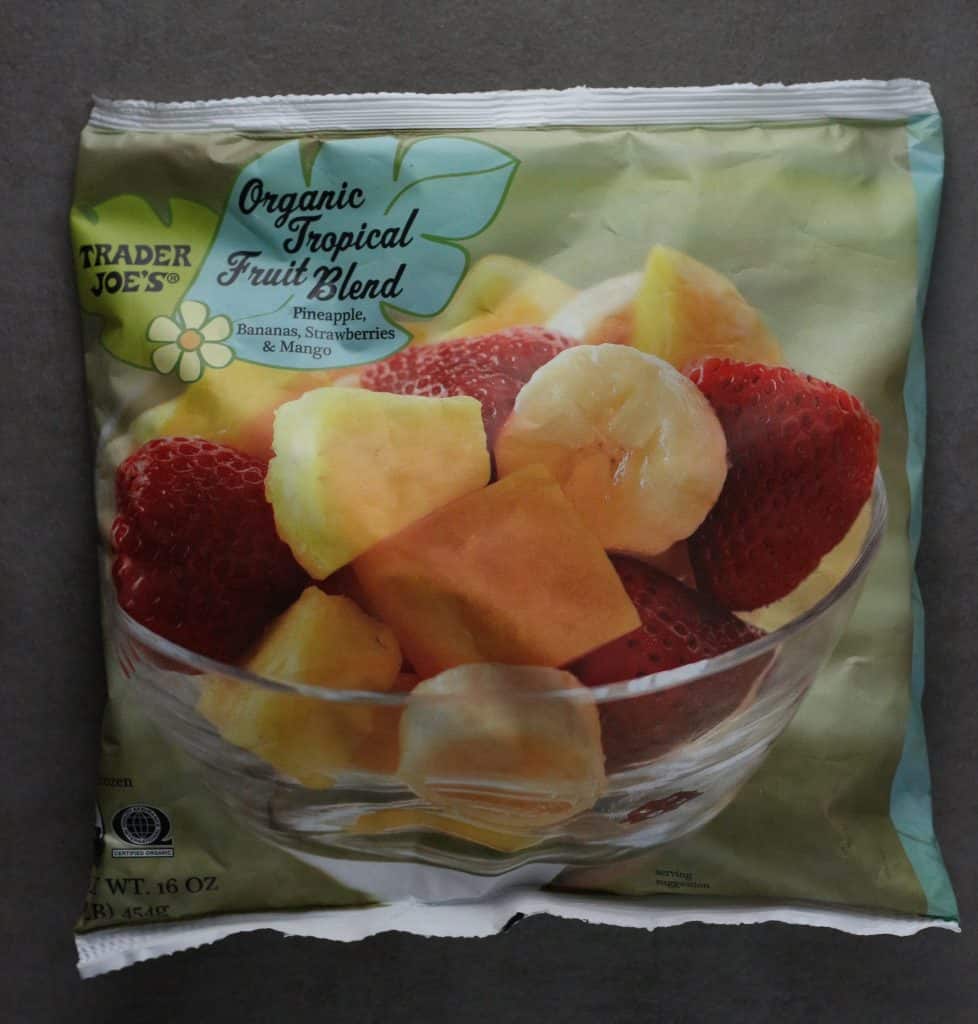 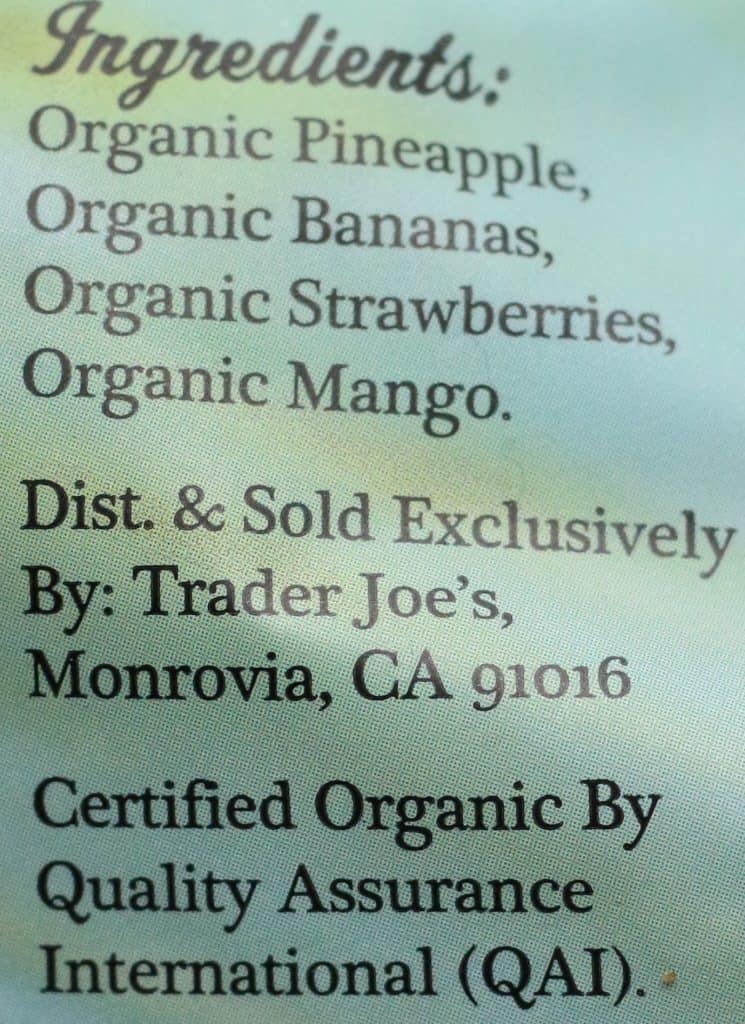 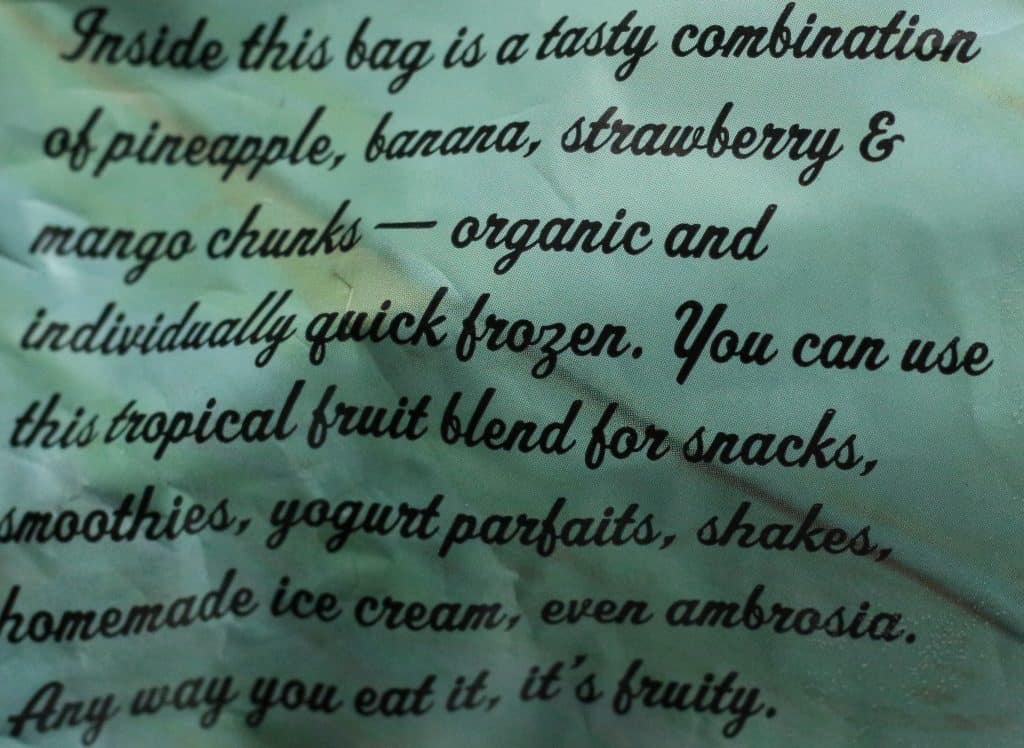 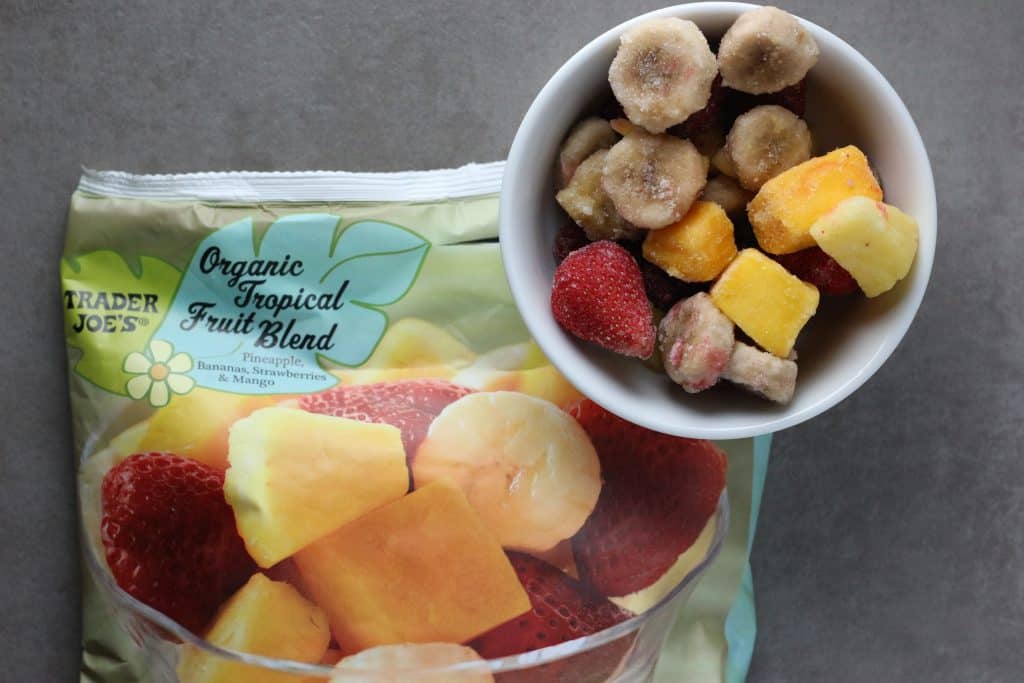 Blended one cup of fruit with one cup of almond milk and it will yield a smoothie that looks like this: 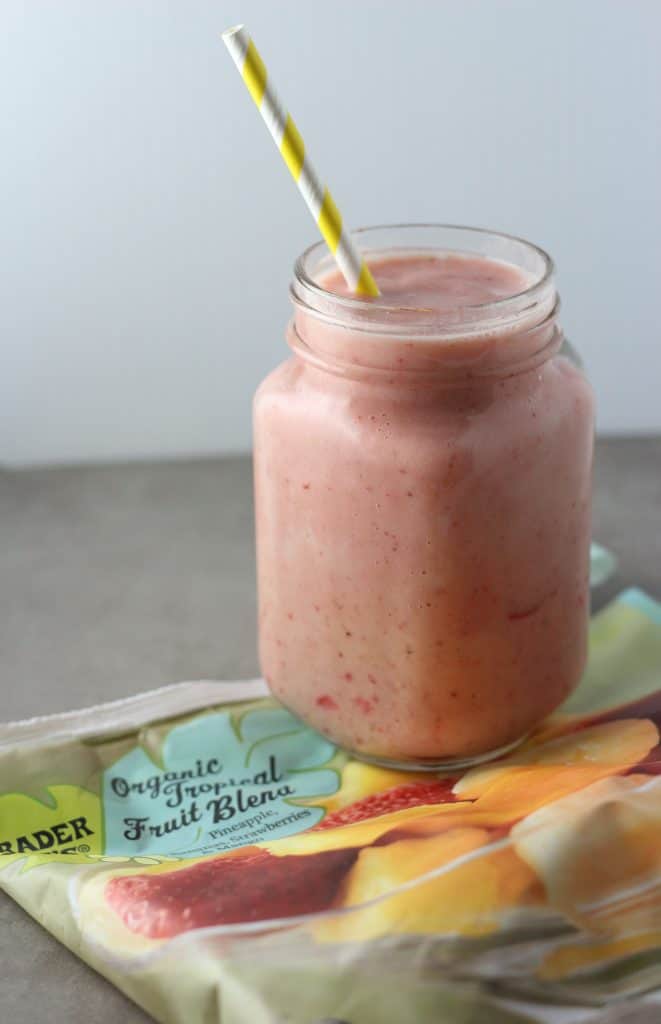 Would I buy this again? Yes, I would buy Trader Joe's Organic Tropical Fruit Blend again. It made for a super easy no-thought smoothie that was full of flavor.