At the school where I work at we are fortunate to offer the kids a foreign language. Of all the languages we could have picked, we opted for Mandarin.

As part of the curriculum, the teacher goes through what is authentic and not authentic Chinese food. At some point, after this lesson, we go on a field trip to Chinatown and take the kids shopping through Asian markets, stores, and a restaurant. All while flexing their newly acquired language abilities.

I've been lucky enough to sit through her class and pick up on some things here and there. But I think it was really important to sit through the lesson on authenticity. What we often associate with a certain ethnicity's cultural food might not translate if you were to visit the country of origin.

Now, teriyaki is Japanese in origin has the Trader Joe San name suggestions.

However, the product name here is more of an American hybrid. This isn't teriyaki, this is soyaki. So, no this isn't fully authentic to teriyaki. A true teriyaki is a thickened sauce.

What comes out of this bottle is thin like soy sauce. But unlike just plain soy sauce, you have a lot of overlapping ingredients that are often found in teriyaki recipes such as garlic, ginger, and sugar. Often times when I've been served teriyaki there are sesame seeds on top of the freshly prepared food which is also found in this marinade.

Now, as a point of clarification according to Just One Cookbook, the word Teriyaki actually refers to the cooking method and how it is prepared. She also clarifies the point of the authenticity of teriyaki compared to what Americans think of as Teriyaki.

So as a hybrid American concoction, it's not bad. If you were hoping for that glaze, you'll be disappointed. But if you love the flavor of teriyaki but the thin nature of soy sauce this is one to try.

For $2.99 it's not a bad marinade to keep around if you can handle the sodium levels here. I'm not sure if anyone marinades their meat using a tablespoon as a guide. I know I haven't. So there is that danger here of consuming a lot of salt. But for a product that is primarily soy sauce, that isn't unexpected either.

It's a flexible marinade that could be used on pretty much any protein or most veggies. I used mine with some ground pork. And would this be a good marinade to use to make fillings for dumplings? Absolutely.

If you can't get to a Trader Joe's, this item is available on Amazon through third-party sellers.

The bottle of Trader Joe's Soyaki:

After being cooked with some ground pork you get:

Would I buy this again? Yes, I would buy Trader Joe's Soyaki again. We liked the fact that this was not terribly sweet like so many teriyakis. 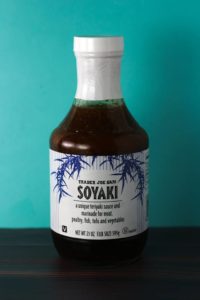 Product Description: Trader Joe's Soyaki is a perennial favorite and is sold all year long.

Trader Joe's Soyaki is a year-round marinade in the grocery aisle.