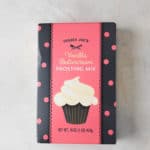 While cake mix is a staple at Trader Joe's up until now there has been no frosting sold. Well, this isn't the pre-made stuff in a tub. Nope, this is yet another mix that you have to do-it-yourself to get the final product.

Table of Contents hide
1 The taste
2 The packaging
3 Overall
4 A visual rundown of this product
5 The Bottom Line
5.1 Trader Joe's Vanilla Buttercream Frosting Mix
5.2 User Review
5.3 Like this:
5.4 Related

Icing. Frosting. Whichever you are referencing we are talking about the pillowy stuff on top of cake or cupcakes.

For a long time Trader Joe's has sold various cake mixes. Once in a while, they come with a glaze, but for the most part, you were on your own if you wished for some frosting on top.

Unlike most grocery stores which would sell you a tub of the stuff, Trader Joe's also made this into a mix. So you can make it yourself on demand.

With a couple of ingredients, you have frosting ready to go. If you are dairy-free just note that shortening could be used as a substitute along with plant-based milk to thin out the consistency.

But after letting the sticks of butter come to room temperature this came together in under 5 minutes. This box will also allow you to frost a box of Trader Joe's cake mix. For me, this generously covered a dozen cupcakes (see pictures below on my frosting generosity).

But what's key here is the taste. For me, this was more buttercream than vanilla buttercream. Don't get me wrong it's good, but for roughly the same price you can get Trader Joe's Vanilla Cake mix which lets you know that it is deeply vanilla. It has those beautiful flecks of vanilla seeds that this product lacks.

But visuals aside, it is a good mix. It's just going to come down to the price point. Yes, a tub of frosting from most grocery stories is cheaper. But in terms of taste, this is way better. But yes, you'll be dirtying a bowl to get to that taste. And yes, opening a can is oh so much easier and faster.

So if you are looking for that taste of homemade frosting without having to measure or sift this is a solid option.

In this box is a plastic bag with the contents of the mix. The packaging here could probably be reduced to just the bag and selling similarly to how their sugar is packaged or how the baking chips are packaged.

Despite the possible overkill on the packaging, it is a really nice-looking box which makes this feel fancy. But then again since you are paying nearly $3 before you start adding ingredients it should feel nice.

For $2.99 this is a bit pricey for what you are getting here. It's mostly just powdered sugar with some vanilla flavor to it.

Would I buy this again? Trader Joe's Vanilla Buttercream Frosting Mix is a maybe for me. It was easy enough to assemble but so is frosting in general with some powdered sugar, butter, and a splash of milk. It absolutely tastes different than the stuff you get in a can.

And on some cupcakes: 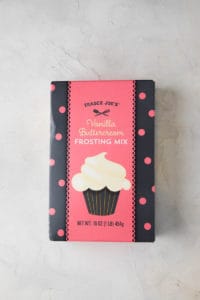 Trader Joe's Vanilla Buttercream Frosting Mix is currently the only frosting available and you still have to do it yourself.