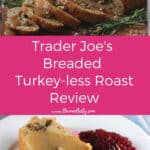 So here is a returning classic that hits shelves before Thanksgiving, but in my store these hang around until the start of the new year. So while the turkeys might be gone, these vegan turkey-less roasts are there for the vegan or people who prefer to enjoy less meat at the dinner table.

I've seen this product in past years and just never thought to pick it up. I'm not a huge fan of turkey, but I do like fake chicken. So I picked it up before Thanksgiving and enjoyed it the day after. I promptly went back to pick up four more boxes. True story.

And yes, this product can be frozen and does freeze well. And looks a whole lot like Gardein's Holiday Roast.

While I haven't tried the Gardein product, they are clearly distinct from one another. Specifically, this product is vegan while Gardein's is vegetarian. This isn't your traditional turkey taste. Or texture.

What you have here is a breaded product that surrounds a loaf of turkey-less turkey. Within that, you have a stuffing that doesn't quite match up to stovetop stuffing, but it wasn't bad either. There is even a packet of vegan gravy.

If you can adjust your expectations, then what you have here is pretty solid. If you are familiar with a fake chicken patty, then you pretty much have an idea of what this would taste like, on clearly a larger scale.

The product comes in a box that is as sturdy as it gets. What you are doing on your end is nothing more than reheating it.

So after about 45 minutes, I got a turkey-less loaf with the added crunch of breadcrumbs. It was actually really good. Also, the serving sizes were on point. You can get 6 servings from this.

It doesn't match the taste or texture of the turkey. But I didn't find that it mattered one bit. What you have here is a solid, presentable dinner option that would make a vegan happy as well as those who are partaking in the same "roast."

I personally really enjoyed this. I did buy a few more. They do freeze well. For $12.99 this is one of those items that are only around for the holiday season. But if you've ever wondered about it, it's totally worth a try.

After being heated and served with side of Trader Joe's Orange Cranberry Relish you get: 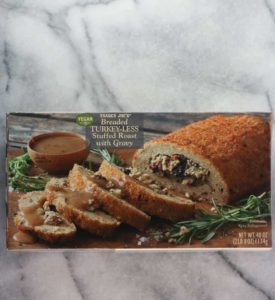 Product Description: A vegan turkey-less roast that is only available seasonally

Vegans rejoice as there is a holiday option that is worth checking out.