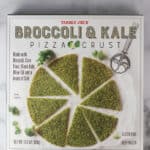 If the Skittles slogan is "Taste the Rainbow," then someone was thinking "Taste the green pizza." Well, I tasted it. It tastes about as attractive as it looks. A pizza made with spirulina would have made for a prettier pie.

This pie, to me, should be sold as "taste the sadness." Now, this comes after two other pizza crusts that seem more successful: cauliflower pizza and the seasonal butternut squash pizza crust.

So all of those pizza crusts have roughly the same format: they do taste quite a bit of cornflour and end up having a polenta-like taste.

So what makes this one different and me so negative sounding?

Listen, I love kale chips. But they have to be crisp. I like broccoli too, but that is a pretty watery veggie.

So when you take this out of the box, it looks like a giant disk of the broccoli cauliflower patties that have been repurposed here as a pizza crust.

This pizza takes a long time. From start to finish, it was over 30 minutes. I went as long as possible on this because I knew from previous experience if there is much hydration, you'll get a floppy veggie polenta-style pizza in each bite.

So 12 minutes for EACH side, plus 5 minutes in the broiler to crisp it up further, plus another 5 for toppings.

And while it did get crisp enough to hold up its own toppings, it was too crisp to make the "crust" edible. So much hydration had been removed, that portion of the pizza was inedible.

As for the taste, it was just ok. It was primarily broccoli and cornflour. The kale seemed lost in terms of flavor and did not come through much. Plus as an added insult, this pie seemed to shrink down a bit.

And this isn't cheap either at $4.29. I'd personally rather have broccoli on my cauliflower pizza than in it.

It wasn't inedible. But wasn't my favorite thing either. Fortunately, the toppings did overwhelm the taste of broccoli in this product.

If you are curious about Trader Joe's Broccoli and Kale Pizza Crust, then by all means try it. But if this pie sounds like a box of "taste the sadness" then this one is ok to skip in my book.

Now, maybe I'm not the target audience for this. It's labeled as gluten-free and while it isn't labeled as such a quick glance through the ingredients makes this appear to be vegan.

However, another glance at the nutritional values, and you might notice the same thing I did: it doesn't seem all that great for you either. Bummer. I guess I'll have to enjoy kale or broccoli the old-fashioned way.

Would I repurchase this item? No, I won't be buying Trader Joe's Broccoli and Kale Pizza Crust again.

The box of Trader Joe's Broccoli and Kale Pizza Crust:

Trader Joe's Broccoli and Kale Pizza Crust is gluten free and made with broccoli, corn flour, kale, olive oil, and salt and shares some commonalities with other veggie crusts at Trader Joe's.