The pros: Trader Joe's Cafe et The Chocolate Collection is one of three seasonal chocolate collections available at Trader Joe's. The key difference with this one is that it contains milk, dark, and white chocolate.

The cons:  It's a seasonal item, so if you see it it's best to pick one up while they still have them in stock. I thought this was the weakest of the chocolate gift sets even though it had the largest variety. There is a lot of texture in these bars so this is best suited for the adventurous types.

So this product isn't new. I just couldn't find it last year. Last year I tried both Trader Joe's Dark Chocolate Flight and Trader Joe's Chocolate Passport. Both of those are dark chocolate centered. These on the other hand are more of a true variety pack. You get a total of 7 bars. You get three dark, two milk and two white chocolate bars. For $9.99 for seven bars this makes for a nice gift at an affordable price. The question then remains what do they taste like?

Now the name Cafe et The is really coffee and tea. So you get seven infused bars. Here is the breakdown of flavors by color of packaging:

Pink-Coffee and Cacao Nib Dark Chocolate Bar. This is nice dark chocolate paired with Cacoa nibs and coffee. There is texture from both here. One doesn't stand out over the other, but makes for a pretty good pairing.

Orange- Rooibos Tea and Scones White Chocolate Bar is many things, but it does not look like a plain white chocolate bar. When Trader Joe's said "infused" I wasn't expecting the tea to be placed directly in the chocolate itself. This has a lot of texture to it to cut through the sweetness. Rooibos tea is assertive on its own and has been known to slip through most cheap infusers. However, because of its fine texture this work fairly well here. Once again, the tea flavor came at the end. It tasted l had washed this chocolate down with some tea. The texture might be off putting to some. The scone crumbs were there for texture, but did not lend much in the way of flavor.

Yellow- Lemon Black Tea Dark Chocolate Bar. Yes, this is lemon, dark chocolate and black tea. I'm not crazy about the pairing flavor wise. I did not feel the need to want to revisit this bar.

Lighter Blue- Cafe au Lait milk chocolate bar has the least texture of all three, but don't expect a smooth bar. There are coffee grinds in this as well. This was sweeter and more milky than the other milk chocolate bar (yes, I know its au lait). This was my favorite of the bunch.

Purple- Cold Brew French Roast Coffee Caramel Dark Chocolate bar is the largest bar in the bunch weighing in at 2 ounces. Dark chocolate is well done and the caramel is a deep rich color, almost the same as the chocolate. This tastes like french roast coffee, but pairs well with the chocolate.

Overall, I'm glad I tried this, but I won't be buying this again. Some of these flavors just aren't right for me. They would make a nice gift set for someone who is adventurous in trying new things. If you don't care for the pairings, then I would recommend Trader Joe's Chocolate Passport for purists who don't want the texture. If you like fillings and less grittiness then reach for Trader Joe's Flight of Chocolate. Save this for only the most adventurous of palates.

The box of Trader Joe's Cafe et The Chocolate Collection: 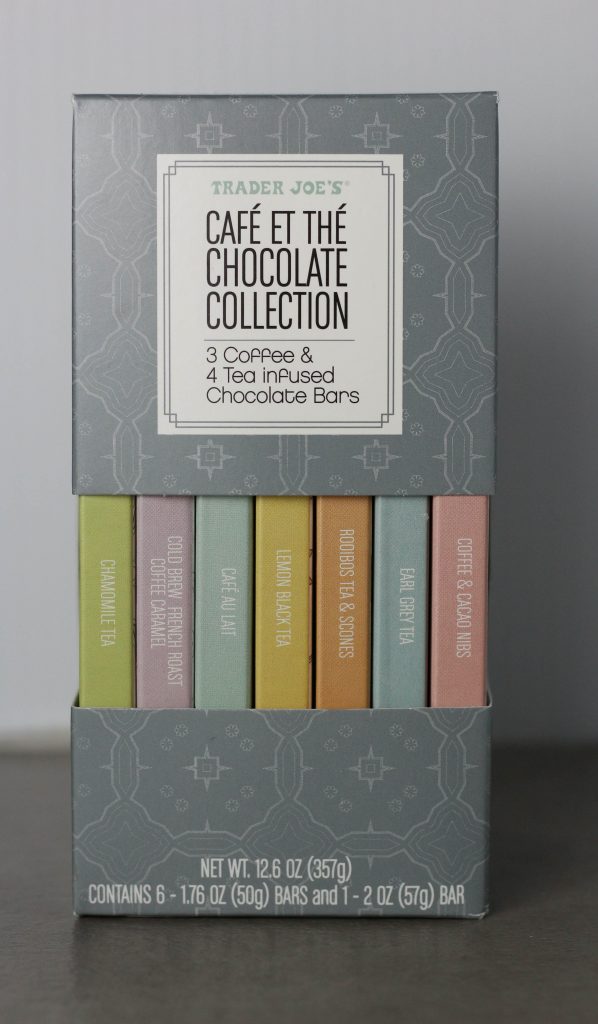 The ingredients for Trader Joe's Cafe et The Chocolate Collection:

Would I buy this again?  While this is seasonal, Trader Joe's Cafe et The Chocolate Collection is worth a try at least once (it killed my curiosity). I don't regret trying it, but I won't buy this again. Some of these flavors were a bit weird and I don't love the mouthfeel of dry tea and fine coffe grinds on my palate.