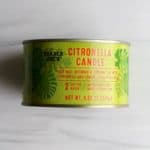 While summer may be over, I find that I actually spend more time outside during the Fall. For me, New York humidity makes it so hard to sit outside. And yes, some days are pretty unbearable.

And not for anything, the mosquitos here in New York are pretty darn intolerable as well.

Thus, the last time I was at Trader Joe's I found this citronella candle. Normally, I've never found them to work well, but for $4.99, what did I have to lose?

Well, I'll tell you this much, this citronella candle is far more potent than other ones that I've tried. And when the can says to extinguish after 2 hours, they aren't kidding.

I went out to my deck a couple of hours later and you could still smell the aftermath of this candle. And that was with a decent breeze. Anyone who stepped on the deck asked if the candle was still lit.

Now, some people seem to attract mosquitos more than others. I feel like I am a human magnet for them.

The last few times I've sat on the deck I was basically chased inside because of the bugs.

But with this candle, it seemed to be potent enough to keep them away. I can say that I wasn't bit once while I sat outside for 4 hours.

It's not exactly a scientific experiment on the efficacy of this candle. But to be able to sit outside for a while was nice for a change.

Now, I will warn you this candle is potent. So if you are repelled by strong aromas, then you too might be chased inside by this candle.

My only other complaint with this is once you pop open this can, there is no cover. Any candle with an aroma I always feel it is best to cover it once again. I did buy two of these so one candle is covering up the other.

But if the container is correct, you should be able to burn this about 14 times before it runs out. That I haven't tested.

But overall, I'd repurchase Trader Joe's Citronella Candle. It got the job done. But feel free to put some space between you and it because of its strong aroma. 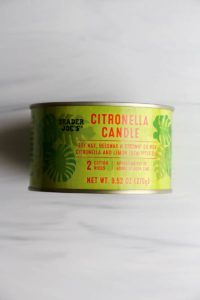 Product Description: Trader Joe's Citronella Candle is a new outdoor items to keep an eye out for.