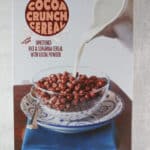 Two gluten-free kinds of cereal. Both are priced just 20 cents apart. You would think that they would be pretty similar. Except my taste buds were telling me that there was one clear winner.

Trader Joe's Cocoa Crunch Cereal wasn't it. As excited as I was about eating Trader Joe's Neapolitan Puffs, I felt the same way. I was just hoping that this particular box would be the all cocoa answer.

Yes, they are both gluten free and released about the same time, but they taste different.

The texture here seemed off. Now, I'm not gluten-free. But I like to see products that don't make me feel like that portion of the population is missing out on anything.

With the Neapolitan Puffs, they totally passed. If I hadn't read through the box, then I would say that was hard to tell.

This on the other hand, I felt like the difference was glaring.

There was the textural issue, but there was also an underlying taste difference here that I just wasn't loving. Perhaps it was the sorghum.

In either case, I was deeply hoping that this would just be an entire bowl of the cocoa variety found in the puffs cereal. On some level, they look like they should, but sadly, they just didn't measure up.

I brought some as snacks to work, but that bag became the snack of last resort. The one where you actually asked yourself, "Am I really hungry?"

My husband demolished the box of Neapolitan Puffs with me, but this box has been sitting on my counters for a bit.

For $3.49 this is a one-time buy in my household. I'd rather spend the extra 20 cents and get something I like.

Would I buy this again? These were a no from me.

How to prepare this cereal differently: 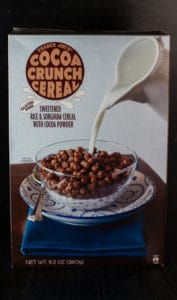