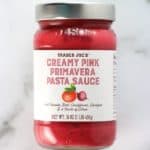 In school, we learned about the color wheel and how to mix colors. We also learned about shades and tones of various colors. So when it comes to cooking certain rules of color just don't apply. For example, in Italian cooking, a Penne Vodka sauce starts off as red. When you add white cream to the sauce, it breaks all rules and turns a color that can only be described as being orange. Except some people also refer to that as being a pink sauce. However, there is a new pink sauce that is actually pink: Trader Joe's Creamy Pink Primavera Sauce.

In a rare moment of Trader Joe's following the rules or coloring in the lines if you will, you get a sauce that is legitimately pink. And I mean pink. Like 1980s neon pink. So pink you actually think there is food coloring in this. However, why use manufactured food coloring when you can use the natural stuff.

They stain pretty much anything they touch with their deep magenta hue.

Add this stuff to a cream sauce and you get a pink sauce that will have you thinking it isn't natural (to which it is as natural as you can get).

Now, color aside I'm not the biggest fan of beets. They need to be paired with something that can mellow them.

I do make beet ravioli. The goat cheese tames the assertive flavor. Add some pesto to those and it is a harmonious union of flavors.

I cracked open this jar and took a taste.

It was unlike any cream sauce I had tried previously.

It was less creamy and more acidic. The citrus and the tomato were the dominant notes. It was thick without being rustic. The cauliflower didn't come through and the chickpeas seem to only add thickness.

It was quite pleasant. I went through my cabinet to see which pasta would hold a sauce well. I opted for ziti.

After boiling and preparing the pasta, I coated my pasta in the sauce.

Through some sort of magic, the acidity was gone and it became a single note sauce. All with just the addition of pasta.

When I took a tablespoon to try it without pasta, the beets seem undetectable, a win in my book.

With the addition of pasta (and a decent quantity of sauce to coat), that's all the pasta was reduced to.

And that's a shame, because, despite the glow in the dark coloring, it held promise. Now, despite it saying it is a pasta sauce, I'm going to see if I can make borscht out of it.

Beyond the notes that come out with pasta, its texture and initial taste held some promise in my book.

Would I buy this again? Unless I can find something else to do with Trader Joe's Creamy Pink Primavera Pasta Sauce, this is a solid no from me.

After being tossed with some pasta you get: 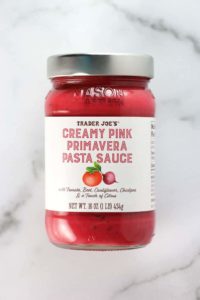 Product Description: Trader Joe's Creamy Pink Primavera Pasta Sauce is new and has quite a few of the popular buzzy foods in it.