The pros:  Trader Joe’s Goat’s Milk Cheese Medallions Marinated in Herbs is new and makes for a decent spread.

The cons:  They did a lot of things wrong with the marinade. Super uneven distribution of the herbs is the beginning of the mistakes here.

The verdict:  I get excited when Trader Joe’s rolls out a  new product. I enjoyed their single serve goat cheese medallions when they had them. I used them all the time for a date appetizer. So naturally there was a bit of excitement when this product made its appearance. I even had a few people even tag me in Trader Joe’s post on Instagram asking whether I had tried it.

Well, I can say I’ve tried it once and probably won’t be trying it again. The cheese was perfectly fine. It was creamy in a good goat cheese type of way. This products downfall is exactly what makes it new and different. Now, I did not check the ingredients online and couldn’t see them clearly on the container, so I was tasting it blind. I put some of the cheese on a bit of bread. My very first bite, I bit into one of the “herbs.” For me that was a black peppercorn.

If you’ve ever had black peppercorn whole, it’s quite revolting. In fact, I flew into a near Gordon Ramsay style tirade. The pepper should have been ground. Every time I went back for more, I kept pulling out little black peppercorns. Having to pick at my food to make it edible, just isn’t fun. They were like little landmines that were detonated by biting into them. It threw off any enjoyable flavors. I went online to double check the ingredients. There it was. As was another surprise, the oil is a blend of canola and extra virgin olive oil.

Now, canola is a neutral oil which means it doesn’t impart a lot of flavor. Then my question is why add it? Some really good EVOO would impart flavor, but to add something with no flavor just left me confused. It’s not like this was a large container either. This container is small enough that it can easily be missed in the cheese section. The only thing that made it stand out was the plastic container.

For $4.99 you are better off picking up some plain chevre, your best olive oil and seasoning to taste. While I can’t come up with any complaints about the quality of the cheese here; it’s the marinade that’s the down fall. It’s herbs, but not fresh ones. They’re all dried ones that they never bothered to rehydrate, so you end up with that dried herb mouthfeel. Overall, I think this is a new product worth passing over in favor of their wide selection of other cheeses.

Would I buy this again?  Nope. I have good olive oil, I have herbs and I am happy to avoid Trader Joe’s Goat’s Milk Cheese Medallions Marinated in Herbs to reach for a better goat cheese. 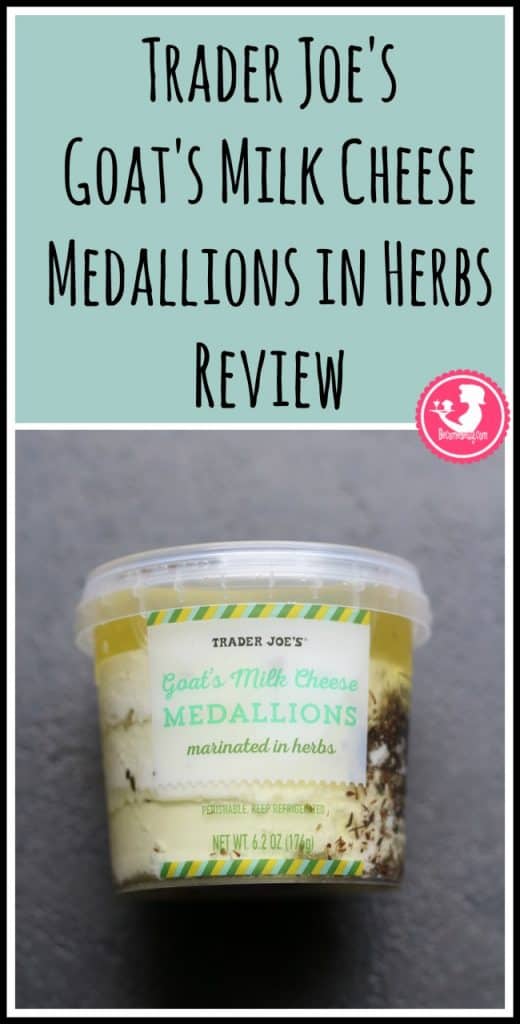