One of my long-standing complaints about new products at Trader Joe's is that they tend to be carb-heavy. But there is a substantial enough audience for good-tasting low-carb alternatives that have been all but ignore up until recently.

Now, low-carb diets aren't the easiest. It seems that there just aren't the same number of options available as there are for the vegan and gluten-free crowd (but for the record, this fits into those categories too).

In fact, this is one of the few products that proudly announces how few carbs it has: 3g total. However, on some diets, the net carb count is actually closer to 1g per serving when you subtract out the fiber.

But with many low-carb items, there are some that taste good and others you wish you never tasted, to begin with.

At first, I hated how these felt just out of the package. They were wet which made me wonder if they could ever be a good replacement for taco night.

And despite my own hesitation on the dampness, I loaded each one up, in the same way, I would a tortilla and found it actually was a really good replacement.

Each wrap is slightly thicker than rice paper on a spring roll. So imagine a double layer of rice paper.

In terms of flavor, it doesn't lend much flavor at all. At most, it reminded me of water chestnut in terms of taste. I've had some Jicama that was sweet, but this batch just didn't seem to lend much sweetness at all.

Overall, if you are looking for a low calorie, low carb, vegan, and/or a gluten-free way to enjoy taco night this is very much worth a try.

Originally, this product was released to the west coast only, however, it has since worked its way to the east coast too.

Here are some commonly asked questions about this product.

No, Trader Joe's jicama wraps are meant to be consumed raw as they are packaged. However, they can be gently warmed if you prefer a warmer wrap.

These should feel damp and not slimy. If they feel slimy then they should probably be disposed of.

Would I buy this again? For taco night, Trader Joe's Jicama Wraps get a solid thumbs up for me. I didn't feel like I was missing anything. You'll just have to get around the idea that this is a bit damper than your typical tortilla shell.

The nutritional information and the ingredients

And with some tacos: 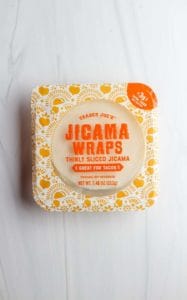