The pros: Trader Joe's Shrimp and Salmon Trio is a nice variety pack of appetizers.

The cons:  This is a seasonal item.

The verdict:  It's that time of year where Trader Joe's really mixes up what you find on the shelves. Perhaps that's why people love shopping there. There is always something new and seemingly nothing is safe from being discontinued due to poor sales. But this item is a seasonal item. Or at least that seems to be what my receipt seems to indicate. Those little letters of "HOL" usually means when it's gone it's gone.

So, is this something worth picking up for a get together or for company? If your company enjoyed seafood then my answer to you is yes. Now, don't expect anything to be mind blowing or amazing. Instead this is a solid choice. You are getting three different appetizers were were all good on their own, plus as an added bonus a packet of dipping sauce that is sufficient for the box. But nothing that is cookie butter level of awesome amazingness. They're all solid apps that are ready in under 20 minutes from start to finish. This is easy peasy reliable appetizer choices in this box.

I started off with the salmon pinwheels because they were the most visually striking. They turned out to be my least favorite. They were a bit fishier than I would have liked. But I also had them plain. I immediately thought they needed lemon or something. The dip picks up the flavor on these. The pin wheels themselves were crisp and fully cooked in the 14 minutes listed. This was finely chopped salmon mixed with dill that just lacked an acid. The dip is almost a must here (ok, it was for me anyway).

Next I went to the shrimp parcels. They were awesome little egg roll like appetizers that were 1-2 bites in size. The only problem I can see serving this to guests is that they might be unsure as to whether or not to eat the green tie around them. I ate them. They were a bit nutty which makes me believe that is probably the pandan leaf listed in the ingredients. Or as they come out of the oven, just take it off. They're more decorative than functional; I also think they'll cause more confusion too.

Lastly, I tried the shrimp toast. Now, Trader Joe's sells Shrimp Toast on its own. I thought it was a little bland, so I was probably avoiding eating the same thing twice. Now, hands down this was by far the greasiest thing in the oven. So if you make these, please be sure to use a baking sheet that isn't just flat. You'll want sides to catch the grease coming off of these. However, these were better than the ones sold on their own. You could really taste more whole shrimp in these rather than finely chopped shrimp. These were the biggest surprise.

The dipping sauce is your basic Thai Sweet Chili Sauce which is always a winner in my mind. It complimented each of the appetizers and there was a sufficient amount to allow all of them to be dipped at least once. I'm the only fish lover in my household so it was enough for double dipping too. The sauce was sweet and had a nice but flavorful kick to it.

Overall, for $3.99 this is a reasonably priced appetizer that has presentation and taste. It's well done if your company likes fish. I'd reach for these again before the season is over.

The box of Trader Joe's Shrimp and Salmon Trio: 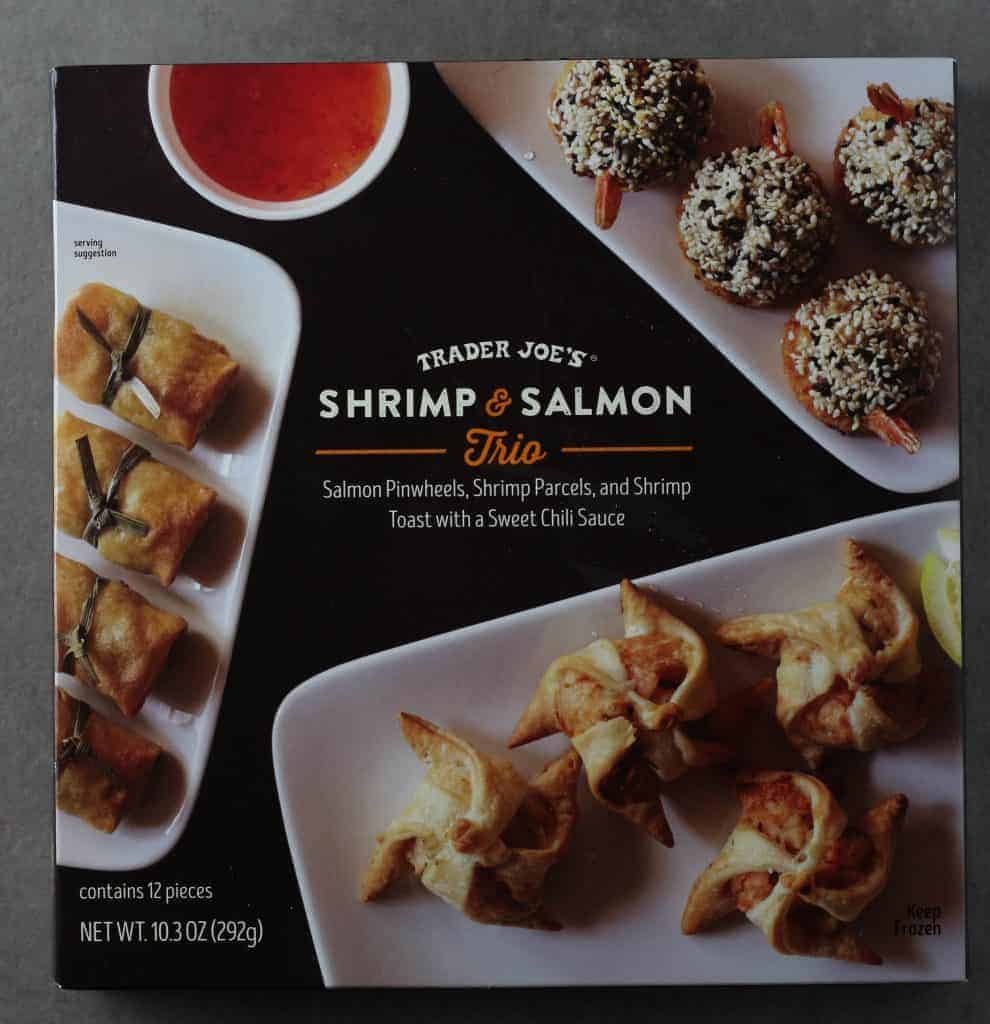 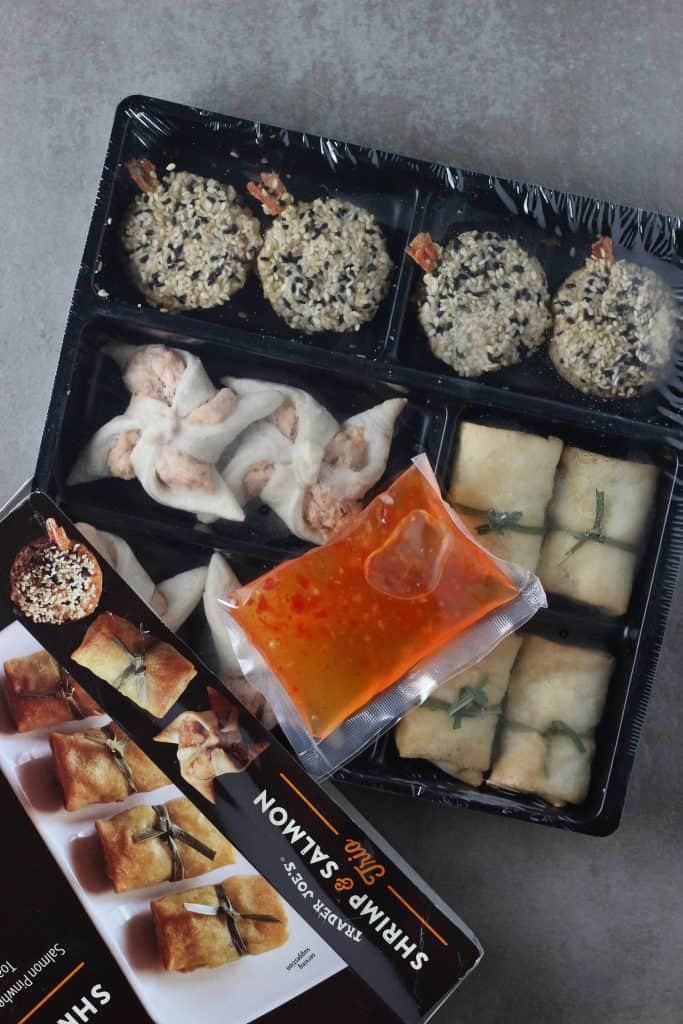 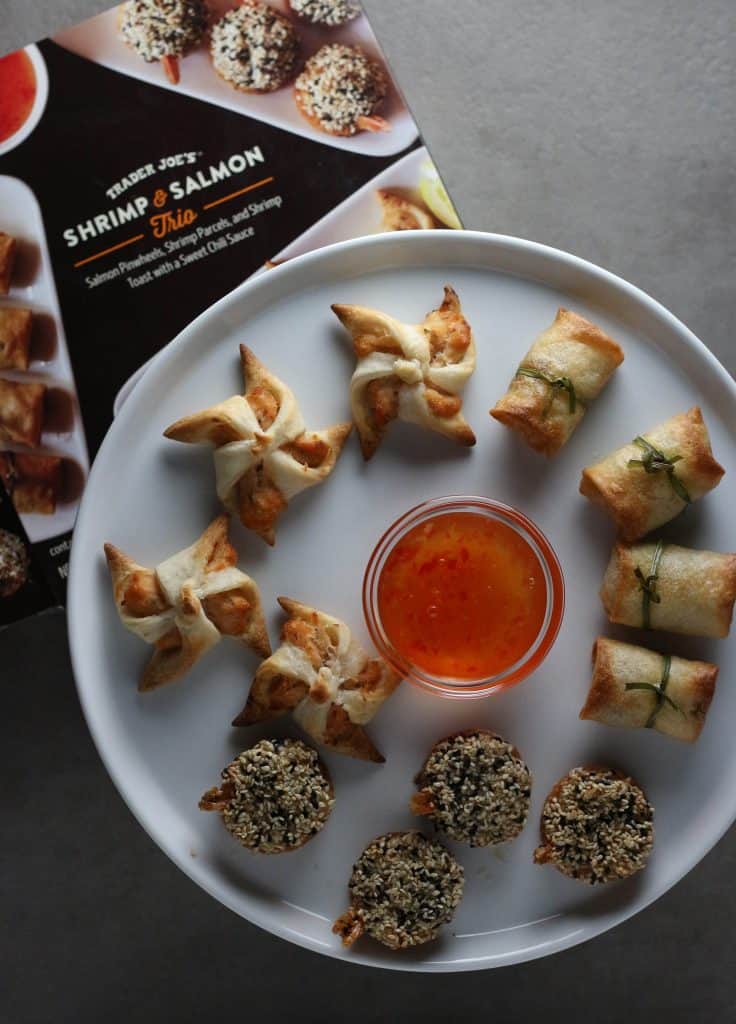 Would I buy this again? Yes, I would buy Trader Joe's Shrimp and Salmon Trio again. These were reasonably well done appetizers at a good price. While not the best frozen appetizers I've ever had, they were good overall.