The pros: Trader Joe's Uncured Extra Thick Cut Maple and Brown Sugar Glazed Bacon is new to store shelves and did not appear to be marked as "HOL" on my receipt which might indicate this might be sticking around.

The cons:  It's bacon and sugar. Just don't look at the nutritional info. Just don't do it. This is also just a spin on candied bacon.

The verdict:  I took a class at Sur La Table a few years back. It was a class that was only offered in one of the Long Island stores. It was also a class where there were three people registered (Their classes hold up to 16 people). What class was it? A bacon class. We made four pounds of bacon for three people that night. That class should have had given us a Lipitor as a party favor when we left. We made everything bacon. From bacon wrapped dates, to bacon jam, and oh, yes, candied bacon. Did I mention we made bacon bark as a dessert? If I could relive certain days of my life, then that day would have been one of them because I had found paradise.

The candied bacon was a bit a surprise for me. How could you make bacon better? Clearly, the answer is adding some form of brown sugar and adding some heat. What comes out is nothing short of magic. If you had the now discontinued Bacon Jam, it was a combination of the sweet and salty. However, this is a slightly more syrupy version of candied bacon. The process here is a bit different. I chose to make this on the stove top. You actually reserve the liquid that the bacon is swimming in until the end. When you add the liquid, it will bubbly quite a bit, letting you know that any food safety concerns you might have had are unwarranted. You see, when sugar bubbles like that it's also a warning sign that you shouldn't sample your bacon without letting it rest.

Now, my package had half slices already packed in there, so there was no concerns about what a serving size was. Trust me, it's not big. But the extra thick cut nature of the bacon more than makes up for that. Each half slice is meaty and thick thus true to the name. There is no false advertising here. Maple syrup and brown sugar round out the flavor for a sticky coating. And yes, you'll want to pick up extra napkins for this bacon. With regular candied bacon, once it's cooled it can be picked up like candy. This is still a bit sloppy and syrupy but so very tasty.

For $5.99 for nine ounces, this is priced higher than some of the other bacon products on shelves. If time is a concern, then this is an awesome choice to reach for. If you want to save yourself a bit of money, then reach for Trader Joe's Ends and Pieces Bacon or your favorite bacon and follow the recipe on the bottom for candied bacon. It's more economical and you might find that it is just as good. 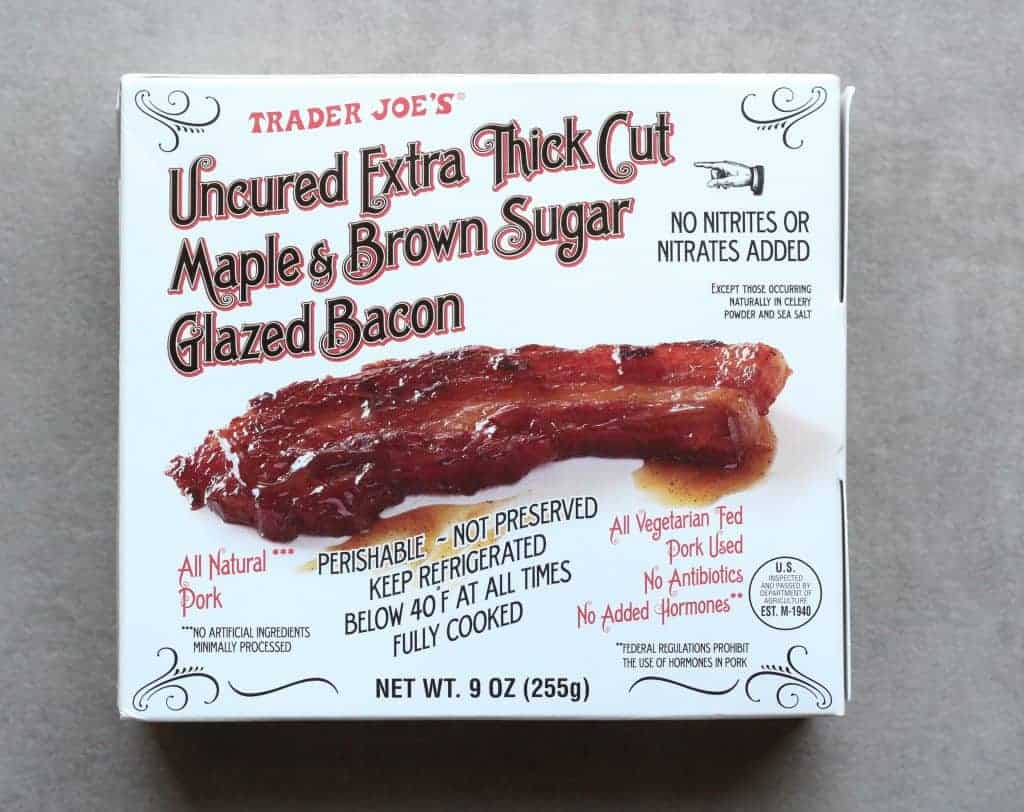 The ingredients and how to prepare this: 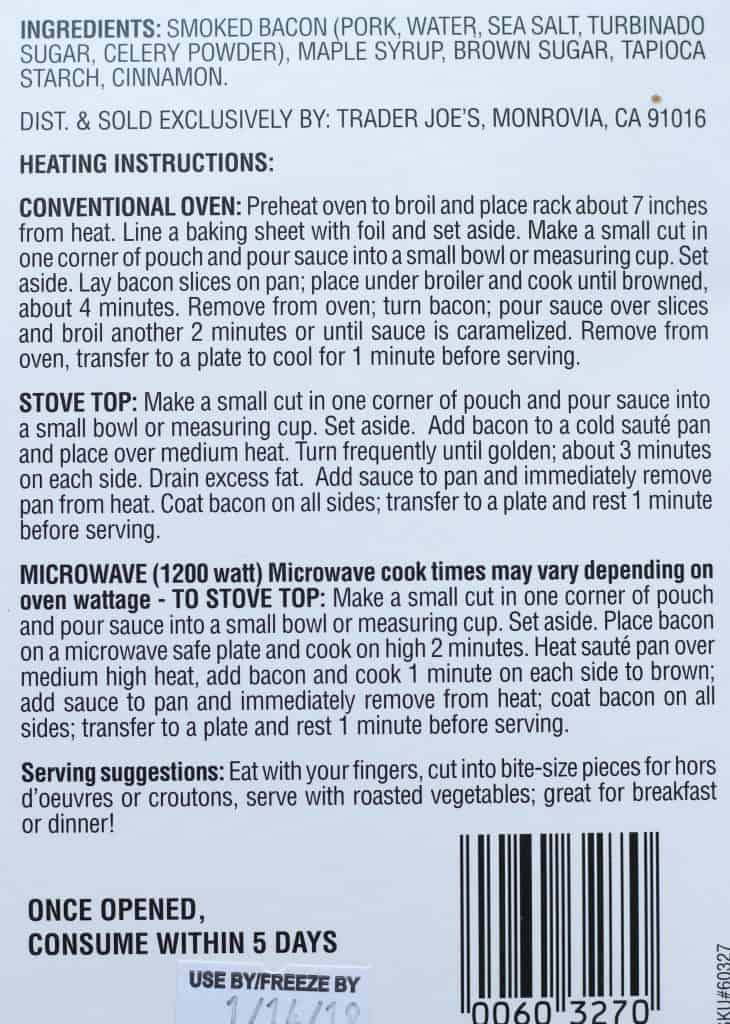 Out of the package you get a vacuum sealed bag: 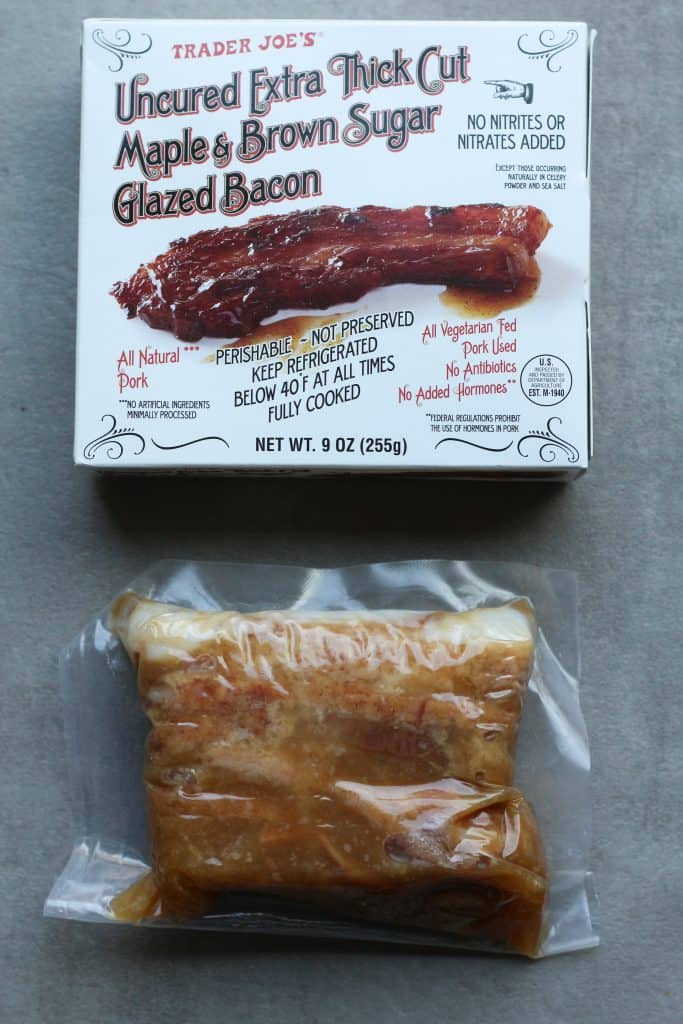 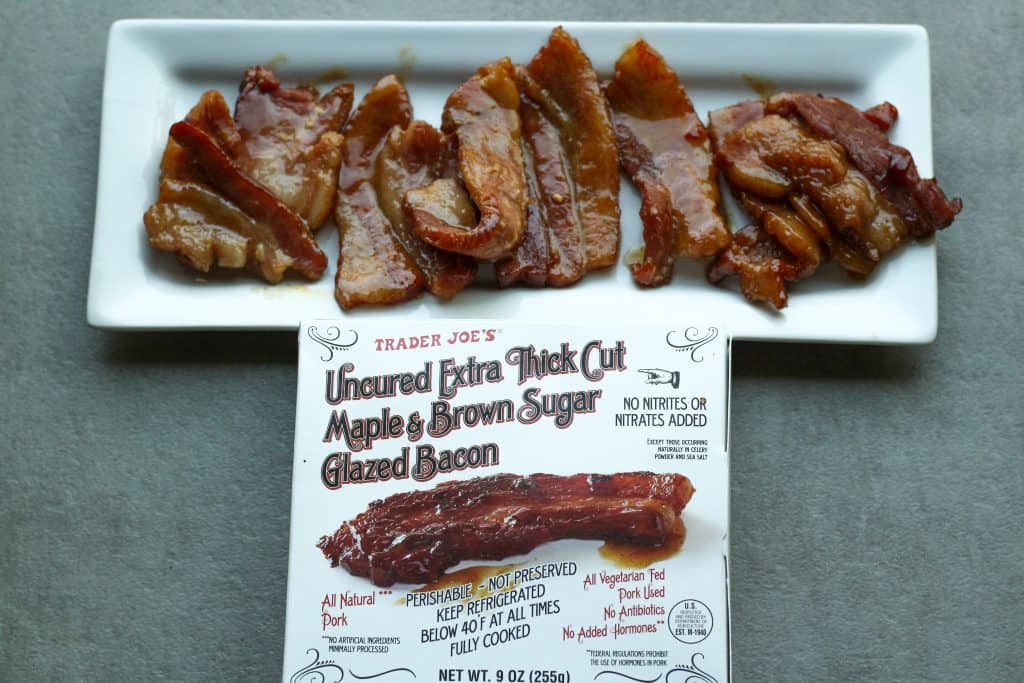 Would I buy this again? While I would not buy Trader Joe's Uncured Extra Thick Cut Maple and Brown Sugar Glazed Bacon again since I make my own. This is still an fantastic introduction to candied bacon that is worth picking up.

If you like Trader Joe's Uncured Extra Thick Cut Maple and Brown Sugar Glazed Bacon, then you might find yourself giving this recipe a whirl.  You can use regular bacon with this recipe or thick cut.  Timing is based on regular cut bacon.  This recipe is an adaptation of what was learned in a Sur La Table Class.
5 from 1 vote
Print Pin Rate
This prevents your screen from going dark while making this
Course: Breakfast, Dessert
Cuisine: American
Prep Time: 5 minutes
Cook Time: 15 minutes
Total Time: 20 minutes
Servings: 8
Calories:
Author: Brenda