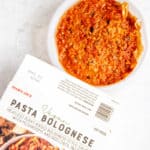 No. You aren't seeing double. And yes, there are two vegan bologneses hitting shelves. The first is a sauce that comes in a jar. The other is located in the freezer section and contains red lentil pasta. Otherwise, they kept the packaging virtually identical.

Table of Contents hide
1 The taste
2 The packaging
3 Overall
4 A visual rundown of this product
4.1 The nutritional information and the ingredient list
4.2 Fully cooked it looks like
5 The Bottom Line
5.1 Trader Joe's Vegan Pasta Bolognese
5.2 User Review
5.3 Like this:
5.4 Related

Now despite this being vegan, you might be inclined to think this is gluten-free. Despite the use of the red lentil pasta this item does contain wheat in the ingredients.

So depending on your dietary preferences this may or may not be in the running.

But most important to me is always the taste. I'm always worried about pasta in the microwave. Pasta can get funny tasting if not downright mushy and gross in the microwave if caution isn't followed.

So I stuck with the shorter end of the directions on the package.

What comes out of the box is nothing more than most freezer meals in a plastic bowl with thin plastic that is meant to be punctured during cooking.

What came out of the microwaved was pretty close to what appeared on the original packaging minus some obviously freshly chopped parsley.

The end result wasn't bad. The pasta was al dente which is pretty impressive considering the only cooking directions provided were for a microwave.

It's not a terribly pretty dish to look at. Perhaps if red lentil pasta wasn't used it might have a more appetizing appearance rather than all red and orange.

But in terms of taste, it was just ok. There are plenty of good vegan meat substitutes. But this didn't taste meaty. I mean Trader Joe's Beefless Ground Beef is solid and has been for some time as has the vegan soy chorizo. Both mimic meat well.

But this just didn't. The "meat" just blended into the sauce and seemed pretty textureless.

What a bummer. You might also find that it is missing one other element: I found mine needed the extra punch of some parmesan cheese. If you really want to keep things vegan then reach for some nutritional yeast.

This is pretty standard packaging for a freezer meal. It comes in a box with a container you heat the dish upon. The meal has a plastic film for keeping it fresh and using in the microwave.

For $3.49 it is one of the better than some of the grab-and-go frozen meals but only seems about the middle of the road in terms of items to reach for.

Would I buy this again? For me, this is alright. It doesn't rival the Indian entrees, but if those were all sold out, I'd maybe reach for one. But for the most part, this one is ok to skip. 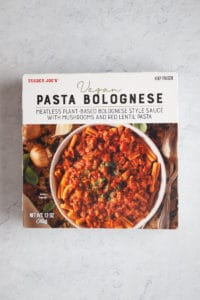