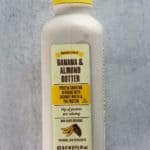 I keep a blender solely for the purpose of making smoothies. Oh and wine slushies. My blender comes out at least once a week. And while I can make a good smoothie, I'll buy smoothies from time to time to see if they make one better. So this time I picked up Trader Joe's Banana and Almond Butter Protein Smoothie to see if they can outdo me.

My typical smoothie is usually a banana, peanut butter powder, an additional fruit, as well as some almond milk. For me, that is what a smoothie should be: thick and flavorful. Why are those two items important? Because if I'm making a smoothie I'm asking it to pretty much be a meal replacement on the go.

Now, Trader Joe's does have some gems on the shelf: the Strawberry Chia Smoothie and Mango are my favorites. I don't buy them too often even though I like them.

So when a new smoothie showed up, I figured it was time to give this a go. This is labeled as being non-dairy, kosher, and heavy on protein.

Good thing because this smoothie comes in at 320 calories. In other words, this is like a meal.

But here is the thing, it is made with coconut water. So this actually is a pretty thin smoothie despite the almond butter.

Don't get me wrong, you can taste the banana, coconut water, and almond butter but that is pretty much it. And while it does have a bit of salt and vanilla (as well as the pea protein powder), I had a hard time tasting anything but the banana and almond butter.

But as a comparison, it is only marginally thicker than a glass of whole milk (not a great comparison for a non-dairy beverage).

So while I really like a good smoothie, something that isn't thick just doesn't do it for me.

Plus the flavor here is just meh. Nothing that couldn't be done better at home. So while this is obviously a grab-and-go type of item; I'd rather grab something else than go with this again.

For $2.99 I'll pick up almond butter and make a better smoothie myself if I'm so inclined.

I think this is a smoothie they could have knocked out of the park, but there is nothing standout about the flavor or the consistency here.

Would I buy this again? Trader Joe's Banana and Almond Butter Protein Smoothie is worth skipping in my opinion. 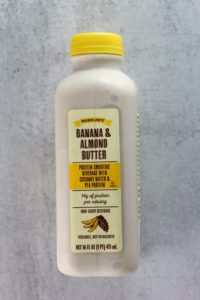