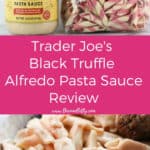 Behold, a two for one review. While most of this will center around the new and seasonal Black Truffle, I made it with the new seasonal pasta, Garganelli. Which by the way, looks a lot like a candy cane color. But for right now, truffle seems to be the flavor of the winter time. And there is no shortage of it.

So let me clarify that statement. Truffle is a love it or leave it type of flavor. So I'm going to approach this as someone who clearly likes the flavor.

So I was excited to see it. My disappointment kicked in when I read through the ingredients. But the second I ignored the ingredients and let my taste buds do the talking and fact-finding, then I became happy again.

You see, I will make own alfredo, but I've also had Trader Joe's Alfredo too. For something that comes out of a jar, it isn't bad. It doesn't come close to homemade, but it is nowhere near the inedible jarred varieties that are found on grocery store shelves.

But the ingredients had me solidly worried. The first ingredient is water. Not usually a good sign in most sauces.

But upon opening this, I was hit with the truffle aroma. Lots of black specs could be seen across the sauce.

So, I boiled up the new Garganelli which is very pretty dry, but is quite faded once cooked. Most of the natural coloring was left behind in the pasta water. But it was decent enough (read I'll try and pay for it just once).

I opted for that pasta because it was 1) seasonal, 2) has ridges which is perfect for sauces and 3) I didn't feel like writing a separate review saying "it tastes like pasta."

While on looks alone, the star was the pasta, on taste it was all about the sauce. Which considering my hesitation based on the first ingredient was pretty good.

The sauce is thick so go easy and add if it isn't coated enough. If you can get past the fact that water is added (as is a thickening blend) and look further down the ingredient list, you have all the familiar flavors found in a good alfredo.

The truffle is pronounced without being overwhelming. If you feel it is too mellow, then the addition of Trader Joe's Black Truffle Butter or Trader Joe's Truffle Salt would bump this up a notch.

For $3.99 this is an affordable luxurious flavor (assuming you like this polarizing flavor). But it is a seasonal item, so if you find that you enjoy it, then you should pick up an extra jar or two as this will likely be gone for the season.

And if that is the case, you could always make your own with the addition of the Black Truffle Butter and Truffle Salt. The truffle butter freezes well and the truffle salt will last a long time.

The pasta here is the new Garganelli which is priced at $2.99. And if you notice the dry color compared to the cooked ones, it faded quite a bit. The directions were on point though.

Would I buy this again? The pasta I'd skip, but I'd reach for another jar of the sauce to get me through the winter months when an alfredo tastes best.

And if you are wondering the information on the pasta here you go:

A view from the top of my dinner plate:

A view from the side so you can see the detail: 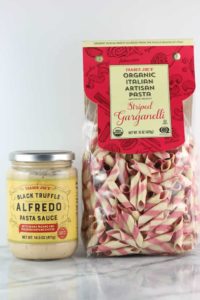