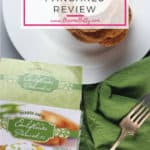 Every now and again, I get a chance to write a review that I'm truly excited to share. Not only is this product new, but it is also sadly labeled as seasonal. This is the time of year when Trader Joe's tends to bring out its best products along with new items I deem as Trader Nos. However, this item has returned and is now back year round.

I'm not a huge cauliflower fan. I like it, but I'm not in love with it. I thought cauliflower rice was alright after consuming it just once. I knew that it wasn't really rice and that my palate wasn't fooled one bit.

The mashed cauliflower didn't wow me.

The Cauliflower and Broccoli Patties were just too boring and plain for my palate.

I've heard lots of good things about the Cauliflower Stir Fry but have 2 bags sitting in my freezer.

It wasn't until I tried (and prepared correctly) the Cauliflower Gnocchi. The crisper that product was, the better it was. That was the first cauliflower product that made me "get" the whole cauliflower substitute thing.

But now, on to this product. Oh baby, these pancakes however are ON POINT.

I bought these and was skeptical, I took a bite and just said "WOOOOOOW" out loud.

I opted to pan-fry these, but feel like they would be fine in the oven too.

And part of me wondered why they are necessary. I mean potato pancakes seem pretty perfect on their own.

However, when crisp these are awesome. I mean seriously awesome.

With a crisp outside and a tender inside. Yes, these taste like cauliflower but not in a gym sock-smelly type of way.

Nope, this is cauliflower done right. The flavor of cheese and herbs with its tender mashed center makes this work. The flavor of leeks and parmesan cheese shine right through. There is still some texture of the riced cauliflower.

And while not 100% of the texture you would get in a potato pancake, this comes darn close. There is a touch of gumminess to these, but otherwise near perfection.

If I'm going to have a product substitute for an original, I still want it to taste like the original. And the closer the better.

And yes, I know it isn't the same. But these were on point. The box does not list these as being gluten-free but a quick read through the ingredients makes it seem as if it might be. And for my low-carb peeps, these still aren't very low in carbs despite the use of cauliflower.

One thing to note, these were best straight from the pan. As they cooled they did get less enjoyable. And I'm going to assume (because I ate the whole box) that if you need to reheat these, then they will be much like leftover cauliflower gnocchi (which is kinda not yummy on a reheat FYI). So heat only the ones you know are going to be enjoyed.

For $3.99, you get six in a box. They aren't huge, but I can't think of any commercially available alternative. It's a price I'd happily pay. My biggest disappointment here is the seasonal notation on my receipt.

These were hiding next to the potato pancakes which were up until recently a bit difficult to find. However, with a sharp eye, you might find that you are lucky enough to find one of these little boxes on store shelves. 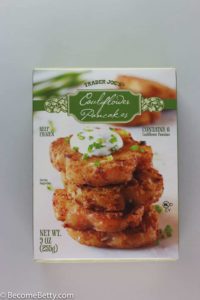 Product Description: Latkes made with riced cauliflower, parmesan, and leeks.

Another cauliflower product you didn't know you needed, but is absolutely worth a try. This comes very close to mimicking potato pancakes. It also has the added flavor of parmesan cheese and leeks.