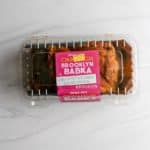 Babka. I'm not going to lie to anyone when I say that the Chocolate Brooklyn Babka might be a staple in my household. But it does debate whether it is meant for breakfast or dessert because I've consumed it at both times of the day. Sometimes twice a day.

This reminds me more of a cinnamon roll made into a loaf. And not quite as moist overall.

But it is way more decadent than Trader Joe's Cinnamon Croissant loaf that is also showing up around this time as well.

I'd recommend toasting this babka for the best flavor. It was ok at room temperature, but much improved when warm (but then again what bread isn't a bit more amazing warm?)

There are plenty of swirls of cinnamon throughout which makes me believe that this would also make a pretty amazing French Toast should you not use it when it is totally fresh. In fact, French Toast is best when the bread is just a bit stale. You'll have more than enough flavor here to really make that pop.

So if you are looking for a halfway point between the croissant loaf and say the jumbo cinnamon rolls, then consider picking this one up.

The following are common questions I get about this product:

Both babkas are solid picks

Can you freeze Trader Joe's babka?

Yes, this product can easily be frozen and defrosted when you are ready to enjoy it.

For $4.99 it isn't bad. But if you are a Seinfeld fan then you might remember this quote: "Cinnamon takes a back seat to no babka. People love cinnamon. It should be on tables at restaurants along with salt and pepper. Anytime anyone says, 'Oh this is so good, what's in it?' The answer invariably comes back, 'Cinnamon.' 'Cinnamon.' Again and again. Lesser babka?? I think not."

So for some, this is the superior babka. For me, I take after Elaine. I prefer chocolate.

But make no mistake, both are pretty solid.

Would I buy this again? For me, I still feel the chocolate is the superior babka. But both are good.

The nutritional information and the ingredients 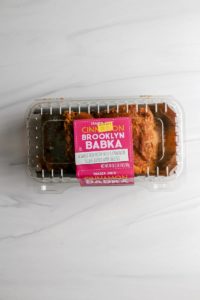