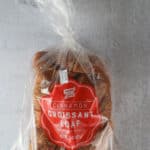 I love croissants. They're more than just bread. They are bread that loves you. And I like it. I've tried anything croissant related at Trader Joe's. I've bought more boxes of Chocolate Croissants than I care to discuss. I love the Almond Croissants just as much. I keep a box of the Ham & Cheese Croissants around in case I want a quick and light lunch.

So if the phrase "best thing since sliced bread" works here, then I'd like to add the word "croissant" next to the word bread. They belong together.

A croissant, is bread that is very buttery. This loaf is no exception. And it doesn't seek to hide any of its layers.

Making croissants is not for the faint of heart. I've done it. Once.

Right before I got married too. #Yolo (eating croissants before getting into a fitted dress).

This here is a case of the latter. Croissants are beautiful, and in my humble opinion, best left to the professionals.

I'm willing to proof a box of the croissants at Trader Joe's, but that is about it.

Now, they've done me the favor and put it in sliced bread form.

Toasted and buttered it has been a morning treat. It also comes in at about half the calories of one of those frozen croissants. So, I guess I'm winning on this one.

Plus, it would probably make for some really good French Toast, but I haven't had a chance to tinker with this. It does freeze well if you are concerned about consuming this loaf.

Needless to say, this is very likable. However, the cinnamon here is very subtle. It doesn't assert itself one bit. So if you have a vision of this tasting like a croissant meets a cinnamon roll, you'll be disappointed.

For $5.99 it's pricey for the bread aisle. But at 10 servings, it's on a par with the price of the croissants.

While cinnamon was good, I can imagine the day when they can marry the magic of croissants with the magic of the Chocolate Brooklyn Babka. That would be the match made in heaven.

Would I buy this again? Probably.

Out of the package, toasted, and buttered you get: 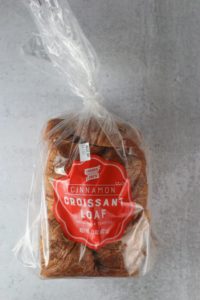