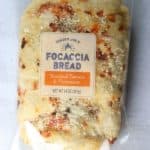 During the most recent heatwave we had on the East Coast, I decided that cooking just isn't for me when the temperature exceeds 95. So after a grocery run, I decided that my meals were going to be charcuterie-based with a side of Trader Joe's Focaccia Bread.

Focaccia is easy to make. It's nothing complicated, but it does take just a bit of time, plus that would require the oven being on. Not a thing this week.

When I saw Trader Joe's Focaccia Bread at the store it was still in a nearly frozen state. A win in my book. By the time I brought it home it was nearly defrosted just from the car ride alone.

With my meats and cheeses, I then sliced this loaf into 8 generous pieces (which as it turns it is just about the same as a serving size).

I didn't even see the directions stating that this could be heated up, because I had no intentions of heating this up. Because it is delicious at room temperature.

It eats a bit like a thick pizza but has the strong flavor of olive oil. Which oddly enough also makes it taste a bit like a sour dough too.

There isn't a ton of toppings here. Just a few tomatoes and cheese sprinkled on top. Just enough to add an extra bite of umami.

For $3.99 is this a yummy item that is perfect for appetizers or dinner when it is just too darn hot out or when carbs are exactly what you are looking for.

Would I buy this again? Yes, I would buy Trader Joe's Focaccia Bread again.