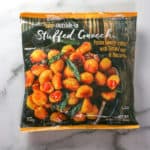 Well, I can now say, I feel like I've seen it all. Or now I can say, and now I've tried them all. Trader Joe's offers no shortage of gnocchi offerings. Ranging from the basic Gnocchi Sorrentina, to the more cheesy Gnocchi Gorgonzola, to Sweet Potato Gnocchi to the non-potato based Cauliflower Gnocchi. Now, Trader Joe's is playing with the order of things. Now, Trader Joe's Outside In Stuffed Gnocchi have the familiar topping of the Gnocchi Sorrentina  on the inside.

A noble idea, but would it work?

Well, when checking this out, the cashier mentioned that they had just tried it. And I promptly asked her what she thought of them. Her first response was "Well, we only have a microwave here." And the rest of how they were a bit mushy than she would have liked.

If that isn't a hint, then I don't know what is.

So, when I tried the Cauliflower Gnocchi, that was the key takeaway. Those little pillows needed to be browned.

And remembering everything I had ever learned from any cooking class I had ever taken was the importance of tasting as you go along.

Naturally, I didn't try these in the microwave. Onto a buttered pan and I followed the directions.

But they weren't browned yet according to the directions.

Time to stop and taste.

If you follow the directions on the stovetop, you might walk away from these a bit disappointed. I would have.

I tried one and thought it had potential. But in order to get rid of the mushy texture, I had to continue sautéing even though the directions said I was done.

I kept sampling one at a time. While these should be done in 8 minutes on the stovetop, I pushed mine closer to 15.

You see the bag to me is always a hint. If you look closely enough at these, you'll see that the pictures are browned. That's the way to go with these.

But what a difference that crispness makes. It holds these together so much better and makes each bite a bit better.

Had I not browned these, I might have given them something closer to a 2. Brown these, suddenly for me they're a 4 out of 5.

Now, one other little gem of information on these. When cooking these that long, the middle will be a bit nuclear. Let them cool down, lest you burn your tongue.

Each of these is about the size of two regular gnocchis. And I didn't feel that it needed any additional toppings as sautéing them in butter did a nice job.

For $2.99, I like this way better than the Gnocchi alla Sorrentina also in the frozen section. And I can't say that they taste much different overall. But I liked the experience a lot better with these. The filling seems way more sauce than cheese, but overall, for a meatless dish, it wasn't bad.

BUT...just be warned. This bag is labeled as being 3.5 servings. They filled a salad plate for me. Is it possible for you to eat the WHOLE bag in one sitting? Not terribly difficult. So plan accordingly.

Tips for making this

Would I buy this again? Yes, I would buy Trader Joe's Outside In Stuffed Gnocchi again.

The bag of Trader Joe's Outside In Stuffed Gnocchi:

Trader Joe's Outside In Stuffed Gnocchi 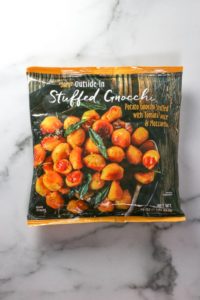 Product Description: A frozen gnocchi with the sauce on the inside.