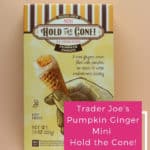 If I had to pick one line where every flavor is pretty much on point, I would say the Hold the Cone! series is pretty darn near perfect. Unless you despise pumpkin, Trader Joe's Pumpkin Ginger Hold the Cone Mini Ice Cream Cones rounds out some good flavors that one can only hope that they continue adding to.

This Hold the Cone! variety was around last year. I just didn't get a chance to try it in time. And if you are unfamiliar with this line, then the Chocolate and Vanilla varieties are available year-round. They are basically the same with the exception of the ice cream.

Last Winter, we were treated to a Peppermint Hold the Cone! which had pink peppermint ice cream with a chocolate cone and chocolate on top. While it was seasonal, I can only hope they bring it back. Other seasonal varieties include coffee and chocolate chip.

For now, this is the seasonal variety at hand. But this one is visibly different. Unlike those previous three cones mentioned, this has a white confectionery coating. If I had to pick one flaw, it would be the coating. I was hoping for some really nice white chocolate in its place.

But otherwise there is a mildly sweet pumpkin ice cream inside these little cones. It isn't even a pumpkin spice. It's a basic run of the mill ice cream. The cone was slightly gingery but not in a spicy way. It was the sweet ginger that I find more pleasant.

If you aren't into the whole pumpkin thing or just manage to tolerate pumpkin flavors, this isn't a bad item to pick up. Would I say this was my favorite of the line? No. But if you were to offer me one of these cones I wouldn't refuse either. But if I were staring at a shelf with those four flavors in front of me, I might reach for these last just because of the coating on them.

But for $2.99 they are an affordable treat. Once a year I wouldn't mind picking up a box. But don't kid yourself, I'm totally making space for those Peppermint cones. And yes, keeping these mini cone boxes is always a challenge in my household as they rarely last longer than 24 hours between the two of us.

A closer look at these little cones:

This is the Fall seasonal variety of the Hold the Cone! series.