The pros:  Trader Joe's Pumpkin Marble Mousse Bar is pretty as a picture. While this isn't pre-sliced, I wouldn't worry about anyone going to crazy over this one.

The cons:  I wished it tasted as good as it looked. Sadly, I was disappointed on this one. Besides, I'm still trying to figure out the "mousse" aspect of this dessert.

The verdict:  When I purchased this item I was thinking exactly two things: I hope this is just like Trader Joe's Cookie Butter Cheesecake Bites and ::Homer Simpson Voice:: Mmmm...Pumpkin. On my first level of expectations, I was disappointed. I adored everything about the Cookie Butter Cheese Cake bites. It struck such a good balance between a crust, a cheese cake and making sure the two flavors were not competing against each other. This sadly, did not live up to that balance.

This product is a combination of two items: pumpkin cheesecake and brownie. Tragically, I don't think either one was really well done. Trader Joe's can put together a divine brownie and in fact, Trader Joe's Sumatra Brownies were worth the 300 or so calories each. The brownie that forms the base of this bar reminded me less of a brownie and more like a cake. It lacked that true fudge flavor and delectable texture. The brownie created crumbs just like a cake. Could they have done a chocolate cookie crust? Yes, and I think it would have been more successful if they had. This also seemed to be about ⅔rd brownie and ⅓ pumpkin cheesecake.

Had it been a cookie crust and ⅔ cheesecake it would have worked much better. The texture combination just did not do it for me either. The magic of a cookie crust is the textural contrast. The brownie and cheesecake are two very soft item so they blurred together. Now, on to the other reason I reached for this: Pumpkin Cheesecake. The pumpkin cheesecake had all the flavors that you would expect from a fall item: pumpkin, cinnamon, ginger, nutmeg, and clove. They work well here. Whenever I've had a pumpkin cheesecake it's vastly different from a regular one. It seems more dense. This one seemed reasonably light compared to a regular cheesecake, just not quite as smooth. Perhaps, that is where the mousse went. There was no distinct layer of mousse and it left me wondering about the naming of this product. However, if the first name is pumpkin, please let it be more than a ⅓ of the product you sold me.

For $5.99 this is a very pretty bar, while its completely edible and decent. It's nowhere near the best that Trader Joe's is capable of. I think with a few tweaks to this product it would have better potential and I would probably repurchase it. As is however, I'll only buy this once. 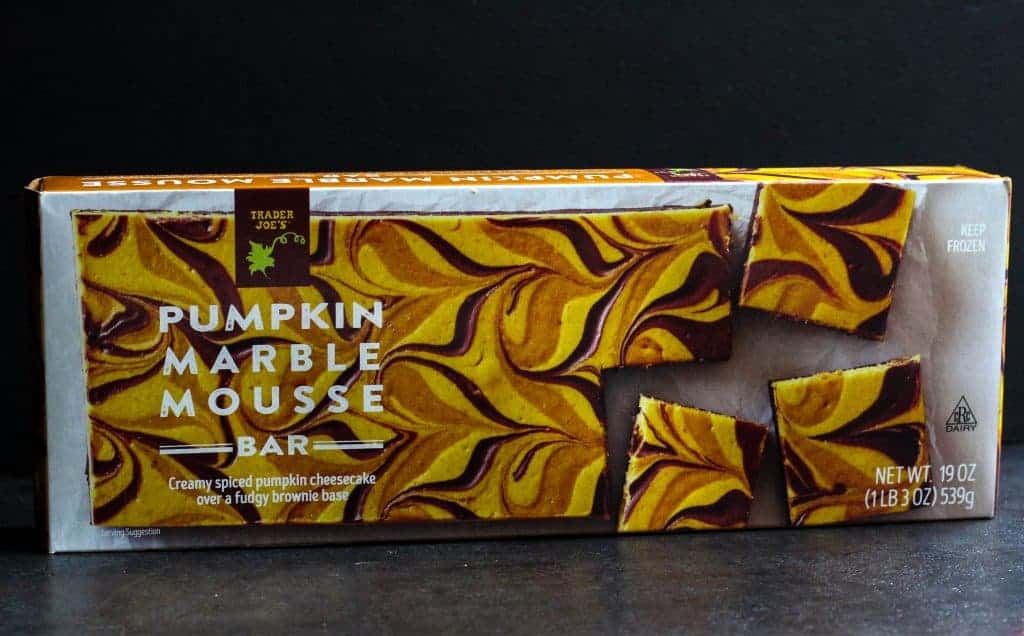 The nutritional information, the ingredients and how to prepare (or how long to defrost and serve): 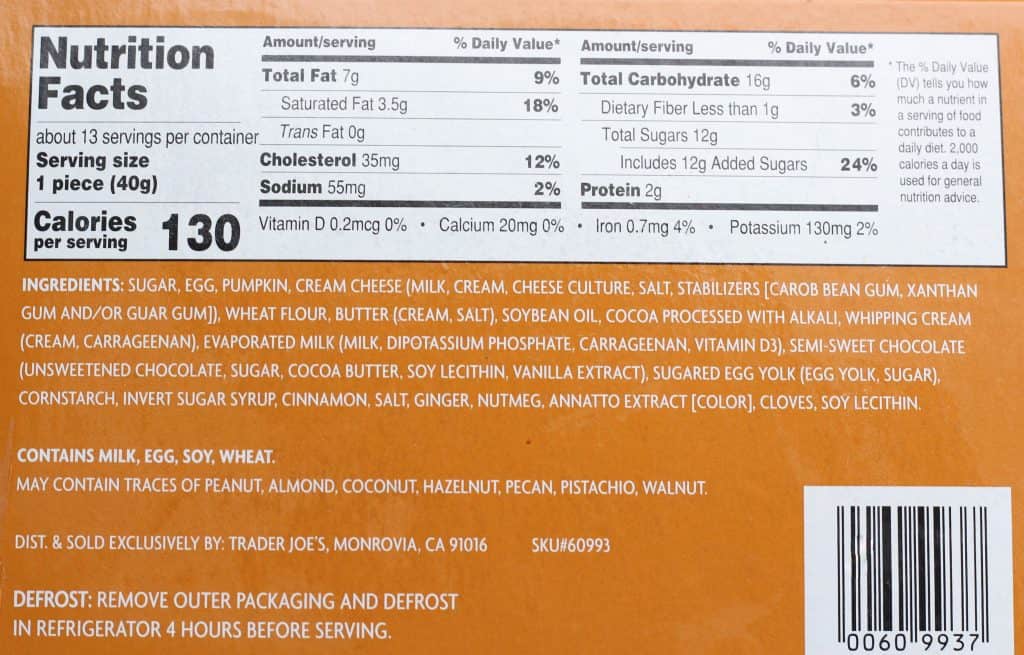 Out of the package and defrosted you get: 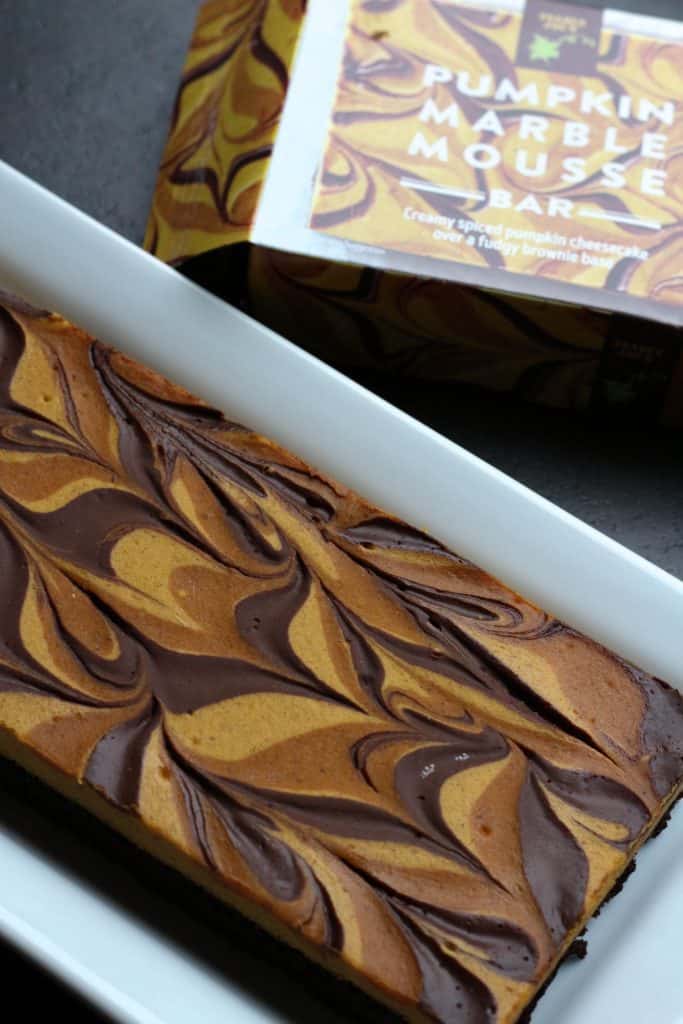 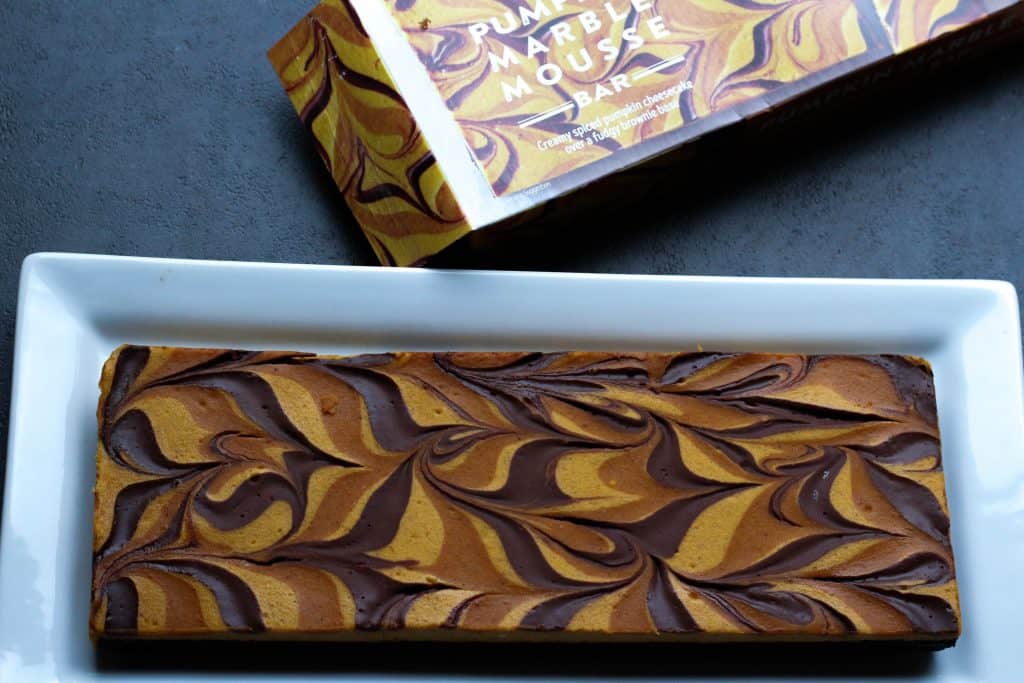 Would I buy this again? Sadly, Trader Joe's Pumpkin Marble Mousse Bar is a no from me. It may be worth a try for the pumpkin obsessed, but I would reach for the real cheesecakes first before reaching for this again.