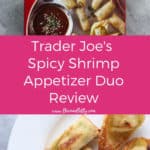 For about a month, I've been putting together a list of the worst things I've had from Trader Joe's. If this wasn't seasonal, it would make the list. How bad was it? Well, the conversation in my household went something like this:

"How was lunch, honey?" my husband asked me.

"This was the biggest Trader No's I've had in a while." "Seriously?" "Seriously."

Not since the Beef Cabbage Rolls and the Carrot Cake Spread did I feel such instant negativity.

I usually like all things Asian-inspired at Trader Joe's. There are honestly a few things I disliked.

And then I had this box.

Now, when I saw these, I thought these were the replacement for the Shrimp and Salmon Trio of last year which was pretty good.

But Trader Joe's likes to mix things up from time to time. Since the previously mentioned item was pretty good, I didn't hesitate to pick these up.

Well for starters, for two things that are supposed to taste different, the feeling seemed very similar. It was the same notes of shrimp and spice.

But the wontons were overpoweringly lemongrass-y. I felt like I was chomping on the herb itself. Then there was a problem with cooking the wonton. They were cooked on either end but managed to be soft on the equator-like line that developed when you flip over food.

And then there were the shrimp rolls, while shrimp was up there in the filling ingredients, the flavor was buried under all the other flavors. As an added detractor, these seemed fishier than usual. I know shrimp is shrimp, but it didn't have that familiar freshness to it.

So these were three-note appetizers: fishy, spicy, and greasy. All the kiss of death in my book. Even though I didn't have breakfast and was starving by the time I cracked into these, I had no desire to push myself beyond eating one of each. That was even a stretch.

I managed to have one of each, before returning them to their rightful place: in the trash can.

And while some form of sauce is pictured here, it's only a serving suggestion. There is no sauce that would bring some balance to these.

For $4.99 this was probably my least favorite appetizer I've tried this year. 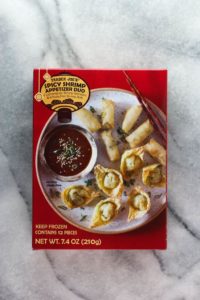