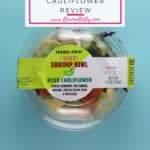 So as 2018 draws to a close, it seems that Trader Joe's has committed to two food products: sugar and cauliflower. The vast majority of the items I'm writing about are super sweet. I was more than happy to give my palate a break. While I don't mind cauliflower sneaking into more items, but for me, it needs to be done well.

This item, it was not done well.

Here is an item that all the individual components are fine. Except for the riced cauliflower. My cauliflower looked like it had been well pureed. Not a deal breaker, but that lead to another issue, the components here just didn't seem to come together harmoniously.

This in some ways, is meant to be like a sushi bowl in the same way Trader Joe's Smoked Salmon Poke Bowl tried to be like a deconstructed sushi roll. This tries to be like sushi in some of the same way, but without the textural and important detail of the rice.

Now, don't get me wrong, the rice in Trader Joe's Smoked Salmon Poke bowl was the low point for me. In good sushi, the rice is well-flavored and seasoned with each of the grains maintaining their individual texture.

If you've had not great sushi, it comes down to the rice.

But here, the cauliflower has been obliterated into a mash or puree. The other elements were fine. The avocado remained fresh and green through some miracle of culinary science. The red cabbage was fresh and crunchy. The sriracha shrimp were hot and spicy. The miso glaze was flavorful and a bit sweet, but I'm not sure it complimented everything in this bowl.

The pickled cucumbers were the first thing I smelled when I opened this container. Not everyone loves the aroma of pickled veggies.

But as a team, they were like the Avengers in the movie Captain America: Civil War. They all ended up breaking into two separate teams. If this bowl were reorganized, they could take some of these elements out to make a more harmonious union.

One thing I can agree on is the calorie count. If you eat this whole bowl, it will be fewer calories than most of the other refrigerated meals at 170 calories. But I only managed to get half way through it before I let it go. The cauliflower mush was just a bit too much for me to enjoy with the other contents of this bow.

For $4.99 I would proceed with caution on this one. It's not going to be a universally loved and adored item, but it seems to be low in calories, dairy free, and does have some decent components. Would I buy Trader Joe's Spicy Shrimp Bowl with Riced Cauliflower again?  This is a buy once and I won't be reaching for it again.

How Trader Joe's describes this item: 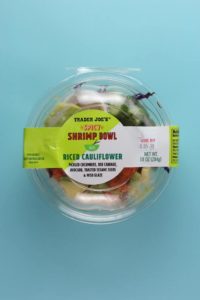 A new sushi inspired bowl from Trader Joe's that takes out the rice and replaces it with riced cauliflower.