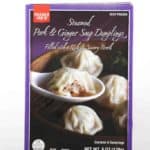 For the past few weeks, I've been living out of whatever can be microwaved and eaten relatively quickly. Hopefully, in a few more weeks I'll have a bit more time to get back in the kitchen and get cooking for real. But for right now, there are certain go-to items that I pick up and stock up on pretty much every time I go to Trader Joe's. Soup dumplings and the Indian entrees are my standbys when things are getting tough in terms of time.

For a while now, Trader Joe's has sold their Chicken Soup Dumplings. It's one of those reliable items that you know will be on the shelf.

Aside from a plethora of dumpling options. The soup dumplings are a completely different experience. And if you have some time on your hands and have Amazon Prime, then check out Emril's Eat the World episode two, where he goes to China in search of soup dumplings.

What I learned was there is quite a bit of variety and variation among soup dumplings, especially the show's focus on Xiao Long Bao. But one of the things they also learn is how to eat these properly. Even this little purple box makes mention of it.

Because these are served very hot, there is nothing like a hot blast of broth in the mouth to sever your taste buds. So yes, read the directions on this one.

Also, take advantage of the really well-thought-out packaging. There are little areas for a sauce of your choosing to be placed in that will minimize the number of dishes you'll need to do afterward.

I tried making them in the microwave. They're a smidge soggy or gummy, but otherwise, they're pretty darn good. The filling is a delicious blend of pork with a nice bite of ginger. Green onion, soy sauce, and sesame oil round out most of the flavor here.

If you are a fan of the chicken soup dumplings, then absolutely check these out.

For $2.99 for six dumplings, this is a good deal compared to ordering out.

Would I buy this again? Trader Joe's Steamed Pork and Ginger Soup Dumplings are an enthusiastic yes from me.

How to properly eat a soup dumpling: 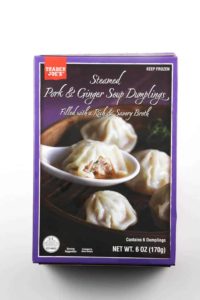