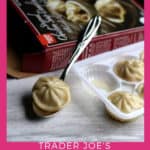 Happy New Year! I hope 2019 is off to a good start for everyone. I spent a bit of the last week relaxing on the couch and spending time with Netflix, Hulu, and my other streaming services.

Last night I had found a new series on my Amazon Prime membership that I had not seen before. I grew up watching Emeril Lagasse when I was a kid and a teenager. I think he is one of the many Food Network stars that helped inspire an entire generation of Foodies.

If you happen to be a prime member, the name of the show is Eat the World. It's episode 2 that I got to watch last night which just happened to be about Shanghai Soup Dumplings. In the episode, they focused more on the traditional pork flavored dumpling: Xiao Long Bao.

To be fair these are chicken, but they are in the same spirit: they are a dumpling with a solid little meatball and soup in the dumpling. A quite tasty combination in my mind. And yes, if you are diet-minded, this package is only 250 calories. It makes for a nice light lunch or dinner.

Now, I don't have a copy of their index to all the different soup dumplings that they had in the show. And if you watch the episode, the guide seemed almost scientific in its precision. There are some decent commentary about what makes for a good soup dumplings. The pasta should be thin enough to hold the liquid in and still be delicate.

The pasta here is not paper-thin pasta. It's thicker like a regular noodle. There is a good bit of soup. That soup was flavorful although it wasn't quite as deeply ginger flavored as the description on the package would have you believe. And yes, it will get messy if you don't have a spoon.

It would be better if you have one of the Asian style spoons which will require less balance and seem better equipped for eating soup. The chicken had really good flavor from the green onions, spices, and soy sauce.

Upon closer inspection of the packaging (which does make this pretty ideal even for work) is the ability to heat it in the packaging it is already in, plus space has already been made in the form of diamond shape indents for a dipping sauce of your choice. No dipping sauce is included. I did not find that it needed it, but if it is your preference then you won't have to dirty anything else.

The amazing thing is that this box has six dumplings and I ate these in record time. There was a good amount of filling which basically means these eat like a meal. After polishing off the whole box, I was full.

Do I believe that you can get better ones in a good Chinese restaurant?  Yes.

Do I believe this is a good choice if you are hunting for them in the freezer aisle?  Yes.

While not as visually beautiful as the dumplings on the show, these are still light, delicious and tasty for something that came out of your freezer.

For $2.99, I would absolutely reach for these again. I made them in the microwave and it was a meal in about 2 minutes.

Would I buy this again?  Yes, I would buy Trader Joe's Steamed Chicken Soup Dumplings on a regular basis

Trader Joe's Steamed Chicken Soup Dumplings are six in a package and the dumplings have soup in them.