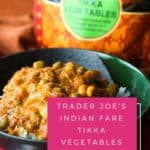 Trader Joe's Indian Fare Tikka Vegetables is different from the frozen entrees. But this is a step up from the boxed variety and uses less packaging 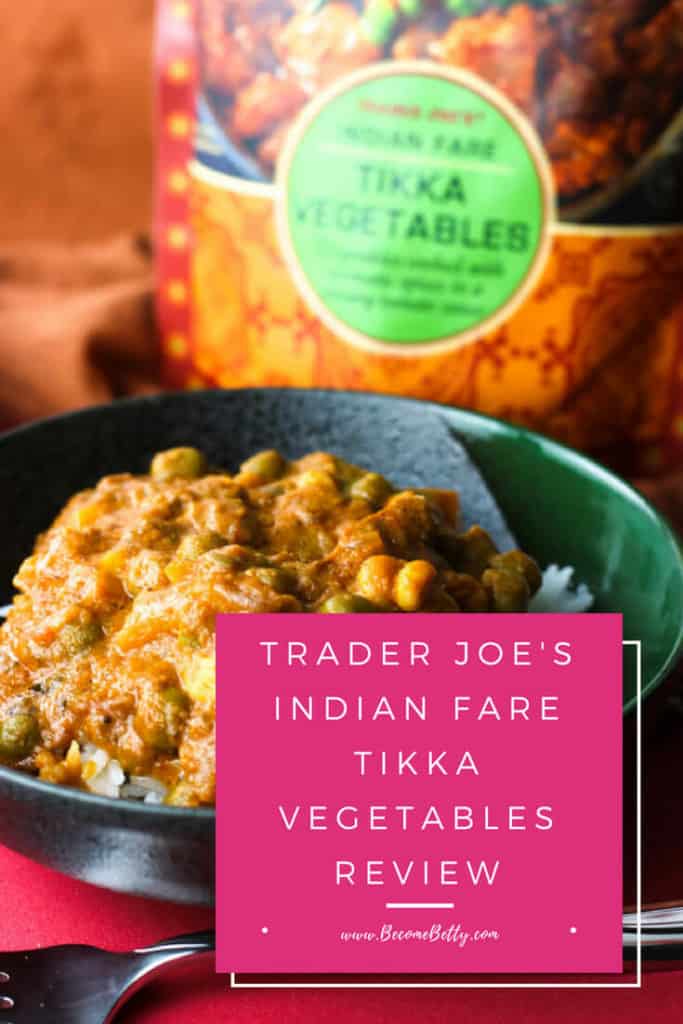 Table of Contents hide
1 Taste and review
2 What to serve with this
3 Overall
4 Product photos
5 The Bottom Line
5.1 Trader Joe's Indian Fare Tikka Vegetables
5.2 User Review
5.3 Like this:
5.4 Related

In the early days of this blog, I pretty much did a straight run through the frozen Indian entrees at Trader Joe's. And it wasn't because I had eaten Indian food on a regular basis. It was through a conversation with my then physical therapist.

Before I started this blog, I intended on this being a full cooking blog. I fell down a partial flight of stairs and in doing so sprained not one, but both ankles badly.

I'm not sure why the female body can create a human being in nine months, but if you wreck your ankles you are never quite 100% again.

So over the course of physical therapy, I got to know the guy who got me walking again quite well. He was Indian and it was almost lunch time.

Naturally, the conversation headed towards what we were planning for lunch. I brought it up that I had never had Indian food. He recommended chicken tikka masala as a starting point.

Since grocery shopping was my big weekly outing (not to mention walking with a shopping cart was incredibly therapeutic when learning how to walk correctly) Trader Joe's Chicken and Paneer Tikka Masala ended up in my cart.

I was in love.  I was also bummed out that I had been missing out for so long.

Needless to say, I've consumed quite a few of those over the last two years.

I did eventually venture in the canned and boxed Indian foods, but never found them quite as good.

This on the other hand was pretty good for something out of a pouch.

It is mild to medium in heat. I looked at the bag and was instantly unsure as to whether this would be a full serving. With the addition of rice, you'll have 2 satisfying meals.

Within the deeply spiced tomato sauce you have chunks of potatoes, corn, peas, and carrots. The heat is enough to slow you down from devouring this meal (unless you are a spicy junky). Beyond the pretty good flavor here, it only takes 60 seconds in the microwave until it is done.

What to serve with this

The picture on the back of this pouch makes it even more carb heavy with the addition of naan. Naan would make a good side to this was well.

But I do think you can make this a touch better with one single addition: cilantro. It's pictured on the front and the back, but is omitted in the ingredient list. I added some to mine (after taking these pictures) and felt it truly made a difference.

This is a different tikka recipe than the chicken, paneer, or vegan tikkas found in the freezer aisle. Those are also complete meals that cost twice as much. Both new Indian Fare pouches are priced at $1.99. It's a reasonable price for a filling an inexpensive lunch. If you get two servings out of it, then it is better than anything you can reach for on a dollar menu.

Would I buy this again? Yes, I would buy Trader Joe's Indian Fare Tikka Vegetables again. 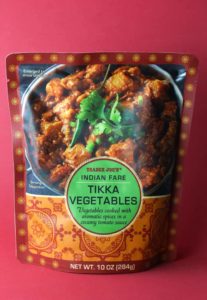 Product Description: Trader Joe's Indian Fare Tikka Vegetables is update from the ones that were once available in a box. This product is shelf-stable.

Trader Joe's Indian Fare Tikka Vegetables is an updated variety that is in a pouch.