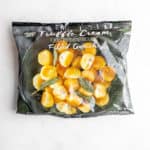 If Trader Joe's has months with themes then October is all about pumpkin then late November into December is all things truffle. Here they are taking a year-round favorite and putting a seasonal spin on it.

If you've had Trader Joe's Outside In Stuffed Gnocchi then you pretty much know the formula of this frozen gnocchi here.

That gnocchi is pretty good frozen gnocchi. But they are quite a bit larger than normal gnocchi. That space is used for a small bit of filling. As much as I want more filling here, I also know as a home cook that any filling when it comes to dumplings you can't overstuff them.

For the most part, I avoid microwaving the gnocchi as the end result is rarely good. Also, despite Trader Joe's being notoriously inaccurate with directions they are spot on when they recommend a cooking method.

But browning these is key. Gnocchi is one of those foods which should be light and airy. These have the disadvantage of being frozen. Once the gnocchi is frozen we are a step down in quality.

But nonetheless, once these are a bit brown and you've tested one of these for doneness then you are in for a treat.

These were tasty in a way the original version wasn't. The originals were very basic and plain. The sauce on the inside didn't make them pop. Here, the mascarpone is a pleasant creaminess to the pillowy gnocchi. I nice contrast between the toasted exterior, soft potato dumpling, and a very smooth filling.

As for the truffle flavor, die-hard fans might be a bit disappointed here. It isn't as assertive as truffle can be. This is more of a balance. Yes, the familiar earthy flavor is there, but to varying degrees. Some gnocchi seemed more stuffed than others.

A few in each bag leaked a bit which was a bit of a bummer. The gnocchi was fine, but the center had long since melted out.

And based on some of the new sauces that have hit shelves perhaps a hint to all of us to go out and buy one of the truffle flavored sauces (there is a new truffle Picante jarred sauce or a refrigerated mushroom and truffle pesto).

But if you really need that pop of truffle you can always reach for a quick drizzle from Trader Joe's Truffle Oil Duo which is around just for the season as well.

In either case, if you've been curious about truffle flavor then this is like training wheels on a bicycle. It's a polarizing flavor, either you'll love it or hate it. And there really isn't much else to describe truffle flavor other than earthy and deeply mushroomy.

In terms of how truffle flavored this is I'd say it's closer to a 4/10. It's there, but it is just in the center which is quite small. But like I said this bag is about balance.

Each bag is realistically two servings. Or three with a side salad or something to balance it out. Each portion is quite filling. Yes, you can microwave the leftovers for 45-60 seconds in the microwave but they aren't quite as good as they were out of the pan.

While the stovetop directions are pretty much spot on (or maybe need a touch more oil or butter to ensure they don't stick). You can also cook these in the air fryer at 380 for about 14 minutes. Yes, use a bit of olive oil spray to prevent sticking and to help with the browning of the exteriors.

Although you can microwave these, these are best if they are a touch crisp on the outside.

The bag is the only packaging in this product.

I've tried all the gnocchis they offer Cauliflower Gnocchi, Chocolate Lava Gnocchi, Gnocchi alla Gorgonzola, Gnocchi alla Sorrentina, Outside In Stuffed Gnocchi, Sweet Potato Gnocchi, and even the dried gnocchi which I haven't reviewed yet (but are always on my pantry shelf).

If I had to recommend them in order of the best to the worst:

If you hate truffles then steer clear. If you've never tried truffle and want a mellow truffle flavor then this is worth a try. To die-hard truffle fans, this might not be as pungent as we'd hope for, but there are more than enough truffle-flavored sauce options to keep us busy.

A close up of the gnocchi: 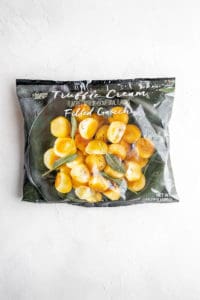 Product Description: Trader Joe's Truffle Cream Filled Gnocchi are new but only for the winter season.