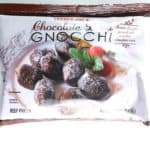 In tonight's review of something you didn't think you need in your life is Trader Joe's Chocolate Lava Gnocchi. Now, I can honestly say I've never thought about pairing chocolate and potato before. Heck, I've seen a lot of hype via the internet. But would it be as strange as the Chocolate Hummus? Or would it need to be made crisp like the Outside in Gnocchi?

When I bought the package, the cashier mentioned that they were new, however, she did warn me that she felt that they were a bit mushy. That told me a lot which helped to guide this review.

According to the directions, your only option is to saute this item. No microwaving this is allowed lest you'll have a bowl of mush. Instead, you'll be rewarded to 6-8 minutes of staring at one of the most visually perplexing items I've ever encountered.

I didn't give the person charged with photographing this food enough credit for their work on the packaging. A dusting of powdered sugar did wonders because when I poured my bag into a frying pan they looked like tiny turds. As a part-time food photographer, I can tell you that brown foods are my nemesis. It takes a lot of garnish to make a photo look good with a mostly brown item. It is even harder when they have this shape as well.

The fact that the directions stated to brown these a bit further only added to me giggling behind the frying pan and wondering how I'm going to eat something that looks like something I scooped out of my cat's litter box.

So if you are a visual eater, these are not for you.

If you are willing to look past the unpleasant visuals, then you have a unique product here.

I can't say that I was loving it.

But I can say I had a few and lost interest in it.

It has the same texture as the Outside In Gnocchi. It does need to get a solid browning to not taste like mush.

There is a small bit of molten chocolate in the middle, but not enough to justify the whole chocolate meets potato thing. It is a weird combination with a really off-putting visual appearance. And yes, trying it with whipped cream helped a bit, but couldn't make up for the fact potatoes and chocolate are best combined as chocolate-covered potato chips.

And yes, they are chocolatey, but you'll probably want something else to cut through that taste too.

If you are looking for a chocolate lava cake, then Trader Joe's sells a frozen one that is pretty good. Otherwise, if the hype has you excited and you can't find it, this is one of those items that is perfectly ok to pass on. There are just too many good treats on shelves to waste it on hype without substance.

Trader Joe's gets points for trying this product out, but for $2.99 I'd pass on this one especially considering these are seasonal and will likely be in short supply.

Would I buy this again? One bag of Trader Joe's Chocolate Lava Gnocchi was sufficient. However, if you are looking to alienate a possible romantic partner, these would be excellent for pranking purposes. In all honesty, it isn't the worst thing I've eaten but is also no standout either. 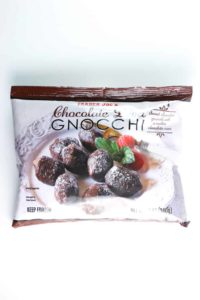 Product Description: Trader Joe's Chocolate Lava Gnocchi is the much hyped holiday product thanks to their popular podcast.

Trader Joe's Chocolate Lava Gnocchi are the new, seasonal, and much-hyped food item of the season.