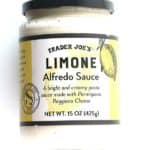 So we go through a lot of pasta in my household. And my husband likes nothing more than a big bowl of creamy alfredo sauce. He'll have it with gnocchi or pasta (but I haven't been able to get him into the whole zoodle craze). But nonetheless, I started him off with the jarred variety. Then I started making homemade.

If you are wondering, I started using Trader Joe's Alfredo Sauce. It's not perfect or close to homemade. But in a pinch, it totally works.

Even around the holidays the seasonal Truffle Alfredo Sauce is worth picking up an extra jar or two if you appreciate truffle flavor.

But now we get a super mild citrus rendition of alfredo sauce direct from Italy. Now, since I bought this jar, I haven't seen it on shelves again. I'm not sure if there are some larger geopolitical reasons for this or if it just happened to be a short seasonal item.

In either case, if you manage to get your hands on this jar you'll be rewarded with a super thick and creamy sauce despite the first ingredient being whole milk. That can be a bit of a polarizing thing. So if you want a thinner sauce, I'd reserve some pasta water to thin this down just a bit.

But it is creamy has large specks of black pepper to go along with it. But in terms of assertive lemon flavor, it just isn't there. With the truffle alfredo, there was no hiding the truffle. This jar just has a bit of brightness to it. It's more of a slight acidity to brighten up a dish. Which is probably why they recommend more than just pasta as a pairing.

I had no problems finishing a small bowl of fettuccine and neither did my husband. It met with his approval although he hinted he would have preferred me to make some from scratch.

If you are a low carb person, this keeps the carbs mostly in check with only a modest amount of added sugar which likely comes from the lemon itself.

But regardless, if you are more on team low fat, then this is one of those items you might not find yourself reaching for. If you are watching your sodium, then I have some bad news for you. You'll get nearly a quarter of your daily serving amount in just a quarter cup of this sauce.

For $3.49 this isn't badly priced for a creamy sauce. Especially when you consider it is pretty close to how much it would cost you to make it at home.

Would I buy this again? Yes, I would buy Trader Joe's Limone Alfredo Sauce again. Not a bad jar to have on hand for a quick meal and it tasted better than the frozen alfredo entrees they sell too.

After being mixed with some pasta: 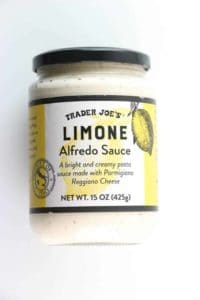