Every now and again, I get excited to try something WITHOUT sugar in it. I mean I like to try more than chips, ice cream, and snacks. So you better believe that I was excited to pick up Trader Joe's No Sugar Dry Rubbed Uncured Bacon. I mean it screams "NO SUGAR." Words I've waited awhile to hear because even I believe that the low carb diets have been largely ignored by Trader Joe's.

When I made this, I naturally wanted to give some to my husband who treats bacon like a natural alarm clock when I'm home. The smell of bacon wafting in the house works its own magic.

And if this review were up to him, it would read as follows: "It tastes like bacon."

Short, sweet, and to the point.

However, as much as I agree with him, I do feel the need to throw a bit of shade at this product.

This isn't my first bacon review. I'm pretty sure I've gotten to all the bacon options from the fully cooked bacon, apple smoked bacon, black forest bacon, dry-rubbed bacon, ends and pieces, and the even the now discontinued one:  Maple and Brown Sugar Glazed Bacon.

So that brings me to my next point, with the exception of the maple and brown sugar glazed bacon, all of them have less than 1 carb. All of them.

Why should the no sugar be in bold? Yes, other kinds of bacon mention that sugar is in the ingredients BUT then it isn't reflected in the nutritional facts.

The selling point in this bacon then becomes two things: lower sodium and crate-free.

In terms of taste, this seemed more pork in flavor than other bacon varieties as wasn't quite as salty. If crate-free is important to you, then you can check out this list that Trader Joe's has on their website about this.

Now, here is the part where I feel like many consumers will be voting with their wallets. This package cost me $4.49.

Not a bad deal right? But when you do the math, this bacon is nearly $10 a pound. This is priced identically to the Apple Smoked Bacon which has a 50% larger package. And when you compare this against Costco or another retailer, you can find lower-sodium bacon at a far better price.

If you are part of a meat buying subscription service, you are at least getting

So, this really comes down to priorities and the willingness to pay for that crate-free labeling. And if you are in the dark about food labeling, you probably aren't alone. Here is a pretty good breakdown of what all the different labeling terms really mean.

As for my household, we don't mind paying more, BUT it has to be good. If we do spend money on bacon, it's usually through a local farm delivery service like Walden Farms. It isn't cheap, but it tastes phenomenal and it's pasture-raised and delivered right to our door.

As always, the choice is yours as to what your priorities in food are and what your budget happens to be, I'm only here to provide my thoughts on how it tastes and put the information out into the world, but an 8-ounce package of bacon in my household is a no go.

Similarly, this product seems aimed at the low carb folks when bacon is already a low carb product. Perhaps it will catch the attention of those needing lower sodium products. But the bold words of no sugar seem more like a gimmick as all the current options have 1 carb or less.

Would I buy this again? No, I will not be buying Trader Joe's No Sugar Dry Rubbed Uncured Bacon again. 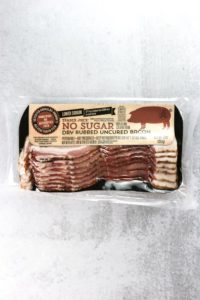