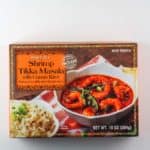 One of my favorite items from Trader Joe's has to be the vast selection of Indian entrees. I'm pretty sure I stock up just about every time I go. It's single-serve and far cheaper than visiting an Indian restaurant. And to be honest, I've liked some of the frozen entrees better than some of the restaurants that I've visited.

So when Trader Joe's Shrimp Tikka Masala landed I was excited to find and try it. Now there are a number of tikka masala options on shelves. So I figured this would be more of the same.

You see the vegan tikka, chicken tikka, and paneer tikka they are all super similar in terms of the sauce. It's a very similar thick sauce that isn't rustic with chunks of tomato but still manages to be thick. This sauce on the other hand is quite different.

The heat here is mild. But the sauce tastes quite different. Its thinner and the spice blend tastes at least slightly different, but still Indian with the classic aromatic spice blends. Perhaps because different spices would complement the shrimp in a way that can't be done with the other proteins.

The rice here is classic basmati rice with some cumin seeds in it. However, I was really wishing they had gone for the spinach rice as they did with the paneer tikka masala.

The packaging here is more like the Butter Chicken than anything else. You have two deep cavities: one for the rice and one for the shrimp and sauce.

In just about 4 minutes mine was done. Now, keep a napkin around as it is a bit challenging to mix the two of these together as the sauce is more like a thin tomato soup.

The shrimp vary quite a bit in size. Some are nice medium size, some are barely salad sized. But the directions were on point (minus me needing the extra minute or two in the microwave).

And let's be honest, where can you get a seafood lunch or dinner for just $3.49? The truth is you'll only get it in the frozen section.

Now, for me, I liked this. And I've already polished off 3 boxes of this. But mostly because it was the quick meal on hand now that I have a 1-month-old and doing much cooking is off the table for right now.

But was this my favorite Indian frozen entree? For me, Trader Joe's Shrimp Tikka Masala wasn't. However, that doesn't make this bad. I think this is solid.

If you are a fan of the other Indian dishes this is totally worth a try to see if you would like it.

Would I buy this again? While I would buy Trader Joe's Shrimp Tikka Masala again, I'd still reach for the other options like the Korma Fish Curry first before this. But that is all a matter of preference. 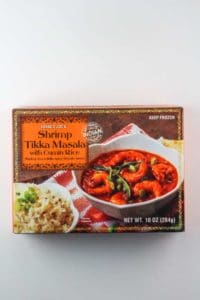