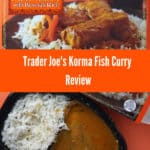 Lunches. There are so many times I am so guilty of not making my lunch. Before I moved close to a Trader Joe's I existed off of frozen meals. But truthfully, they were pretty terrible. The calorie count was reasonable, but there was a sacrifice in taste. Most of those frozen meals tasted like cardboard. Trader Joe's Korma Fish Curry tastes like anything but cardboard.

When I did move close enough to a Trader Joe's (ok, like 3 of them within 20 minutes, I'm spoiled), I started picking up their Indian meals. I was always too intimidated to try Indian food in a real restaurant. But truthfully, the frozen Indian selections can go toe to toe with an Indian Restaurant.

When this product came out in 2016, I had a few thoughts about it since I was bringing it to work: how would Indian AND fish be in the microwave?

And truthfully, they weren't bad.

In fact, this has become my go-to lunch of choice.

I was honestly not looking forward to trying this as much as other items because of fear that it wouldn't turn out well. But truthfully, my only disappointment is that they don't sell the sauce by the jar.

I would buy the sauce all on its own. It's a tomato base with a good kick of coconut flavor and cashews for extra creaminess.

In terms of heat, this is only mild heat. It was enjoyable but won't slow you down much. So real spice junkies might want to bring some extra chili powder to bring this up a notch.

The box makes you expect you are getting fish sticks with this. However, upon opening this I found a nicely portioned piece of fish. In the multitude of boxes of this that I have since purchased, not once did it look like fish sticks. They were actually nice fillets each and every time.

The swai did not bring much flavor and seems to be a very mild-tasting fish.

If you enjoy the other Indian selections at Trader Joe's like the Tikka Masala dishes, then you'll really like this as long as you like fish.

If I had to complain about one thing, it would be the Fenugreek leaves in the rice. They seemed to get stuck on my tongue and were about as much fun as nibbling on a Bay Leaf. But otherwise, this is a really enjoyable dish.

For $3.49 you are getting a real fish meal. You couldn't eat that cheap or healthy at Mcdonald's (other than the $1 menu).

Would I buy this again? Trader Joe's Korma Fish Curry has been a staple in my weekly shopping list. It's worth a try if you enjoy the other Indian entrees.

Out of the box:

Out of the microwave: 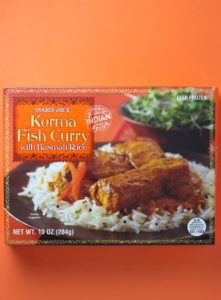 Trader Joe's Korma Fish Curry is very well done and holds up well to the microwave. If you enjoy the tikka series, then you'll probably enjoy this entree.