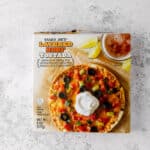 Usually, I say this around the holidays, but I'll say it now: it is time to make some room in your freezer because there are lots of new things to try. It seemed like Trader Joe's was slow with the pace of new products, but recently a bunch has finally landed including this Trader Joe's Layered Beef Tostada.

If I had to say which part of the store has the biggest crowd of people it's usually the frozen aisles. There are a lot of hidden treasures to be found there. But I'm not sure Trader Joe's Layered Beef Tostada isn't going to be one of them.

I had serious questions about how something that is supposed to be crunchy could be done well out of the freezer.

Let's start off with the taste. First, there are way more beans than beef. So much so that I was questioning if there was any beef in mind. If it did have beef, the texture had been minced so finely that it blended into the more generous portion of beans and cheese. The flavor here is good, but I found it got better with the addition of some hot sauce.

The picture on the box is perfectly styled and the toppings are evenly distributed. That wasn't the case for the tostada that I got. Mine were lumped all in an s-shaped pile. They were very generous with the black olives. The tomatoes followed the same shape and were again piled up. And unfortunately, the freezer is never kind to fresh tomatoes and nor is reheating them. There were only a few slices of green onion to speak of.

The biggest problem I had was the bottom of my tostada was soggy. I used the recommended cooking directions and made this in the oven. By the end of 15 minutes, it did look done. But in reality, it probably could have gone another couple of minutes. But I don't think the texture here could have been improved any other way but to actually place it on the rack of the oven (a calculated risk I know, but maybe next time). Or maybe use my undersized air fryer.

But alas, this was a filling meal. Was it as good as say an Indian meal from the frozen foods section of Trader Joe's? Absolutely not. Was it a quick dinner that was filling? Yes.

While this is in no way my favorite, this item is tolerable especially when you are hungry and don't feel like ordering takeout. And if you are a household of one, making tostadas may be more of a mess. So this may end up being more cost-effective if nothing else.

Trader Joe's Layered Beef Tostada is packaged much like a frozen pizza. Inside the box is a tostada wrapped in plastic wrap.

Trader Joe's Layered Beef Tostada aren't going to wow or break the internet. This is meant to take a basic takeout item and make it affordable and no-prep.

Would I buy this again? While this was just ok, I would probably buy it again. This was better than keeping a just ok burrito in the freezer for when I get hungry. It was filling, and with a little creativity and fresher toppings, it is very edible. 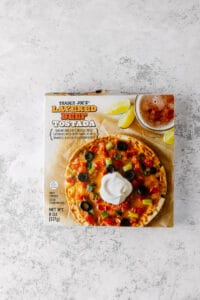