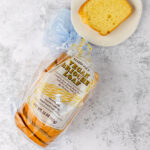 If it looks like a duck, sounds like a duck, quacks like a duck, is it a duck? If you are at Trader Joe's it just might be a vegan duck. And in this case, here is the best (and only) vegan brioche I've ever had. And if someone handed it to me and said nothing I would not have noticed.

Brioche- that pillowy, addicting, eggy-buttery bread. I remember the first time I bought brioche at Trader Joe's. Not only was it half the price of most supermarkets, but it was also divine. Like sit down with the loaf and wonder where it went kind of good.

But there are two things that make it distinct: eggs and butter. Both are not vegan items. But vegan items have come a long way. In fact, a lot of vegan butter is pretty comparable to regular butter these days. And while I haven't dived too far into vegan eggs, I can tell you with absolute certainty that this is as close to the original as you can get.

The loaf is slightly smaller but you are getting all the joy per bite possible here. I had some misgivings trying this and assumed I would find differences quickly. Nope. I consumed a slice and said "Damn. That's spot on."

Other members of my household were inclined to agree and couldn't find major differences in both visual and taste.

So if you are vegan or just allergic to milk or eggs, then this is a fantastic alternative for you. It will give you every bit of the real feeling of brioche without the ingredients that might not jive with your digestive tract or your priorities.

And yes, if you are not vegan or allergic, you can reach for this and feel like it's a genuine substitute.

Like other bread products, this is sold in a plastic bag that has a plastic clip keeping the air out.

Trader Joe's sells several brioche products. While most aren't vegan like this product, this adds to a line of delicious bread.

While this is priced the same as Trader Joe's Sliced Brioche Bread, this is a slightly smaller package (17.6 ounces vs. 15 ounces)

Would I buy this again? Yes, I would buy Trader Joe's Vegan Brioche Loaf again. It was very well done and I'm not sure I would have noticed the difference. 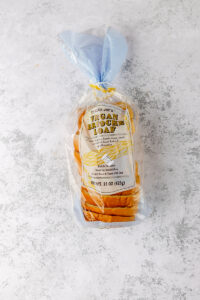 Product Description: Trader Joe's Vegan Brioche Loaf is new and is spot on.