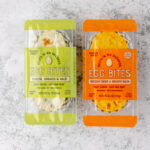 I have a feeling there is some overlap between the Trader Joe's crowd and the Starbucks crowd. I think Trader Joe's recognizes that and has essentially recreated those sous vide egg bites and made them priced a bit more reasonably. Besides, Starbucks is just reheating them or you anyway as those aren't made fresh when you arrive. For $2.99 this will likely save you some money over Starbucks' Egg Bites because, by me, those will set you back $4.95.

This isn't Trader Joe's first venture into egg bites. They had a different variety in 2020. They were priced higher at $3.49 and were in little plastic-shaped cups.

They've since gone back to the drawing board and decided to make them a bit more similar to a popular coffee shop's egg bites.

Since Trader Joe's Egg Bites come in two different flavors let's talk about each one separately. Both share certain things in common: these egg bites are prepared sous vide which means the temperature is set at a specific lower temperature to ensure that these bites reach the correct temperature throughout. Eggs are very sensitive to heat and they are very smooth.

For a lot of us, carbs just don't fill us the way a protein-filled breakfast will. Or perhaps carbs are something you are keeping to a minimum. In the case of both varieties, you'll be at 7 grams of carbs or less.

As for protein you are looking at 12-16 grams of protein per serving with the uncured bacon variety having more protein than the egg white variety.

I do enjoy bacon, egg, and cheese from time to time. And this had some good bits of bacon in it along with a nice amount of cheese. Nothing that made it stringy, but one where you knew the flavor of cheddar was there. In any case, this seemed eggier than Starbucks. They do bear certain similarities, but there are some key differences.

Cottage cheese is a major ingredient in both. It's first for Starbucks, but second for Trader Joe's. Starbucks uses Gruyere and other cheese, this uses cheddar. But the bacon adds enough of a punch to this that a lot of those subtle differences disappear. Is Starbucks more bacon-y? I'd say yes.

Quick personal bias with these: I am not a kale or spinach for breakfast kind of person. And if you are at Starbucks these would have mushrooms in place of the spinach. But Trader Joe's choose to keep these green. Not a bad thing. Also, like the other variety Starbucks keeps cottage cheese as a first ingredient to keep the flavor a bit richer.

Aside from Starbucks, these are some very rich tasting egg whites. Yes, this package and product is much paler than the previous reviewed variety because these lack the egg yolks. So yes, you are saving the cholesterol here. There is a good amount of veg here, but it didn't feel like an it overwhelmed anything.

It was good. Not my favorite of the two.

Both Trader Joe's Egg Bites come in similar packaging that is colored and clearly labeled. Inside the package is a paper cup holding both egg bites. The cup that holds these is virtually identical to how Starbucks Egg Bites are packaged.

If you love Egg Bites, but can't fathom spending as much as a dozen eggs on two little bites then I hear you. Here are some helpful posts to help you recreate these at home. And no, you don't need special equipment other than an oven:

If you love egg bites, this is a solid and cheaper alternative. Keep in mind Starbucks charges nearly $5 for the same product and all they are really doing is microwaving it for you. Is that worth $2? Well, if you are starving then maybe. But if you can heat it at home or work, these are worth the $3. If you are looking to save further money, these aren't hard to make at home either even without sous vide equipment.

Would I buy this again? I would buy Trader Joe's Egg Bites with Cheddar and Bacon again. I wasn't a huge fan of spinach and kale. But those are just personal preferences. 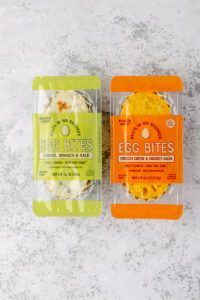 Product Description: Trader Joe's Egg Bites are available in two varieties which are very similar to a perennial Starbucks favorite.