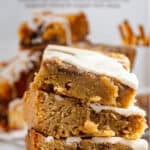 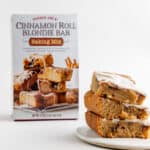 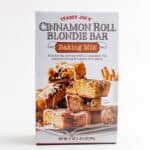 Fall items have finally landed at Trader Joe’s. While there is a lot that has been offered in previous years, there are a few new and exciting items. Yes, pumpkin items but there are some other flavors that are more fall-inspired like Trader Joe’s Cinnamon Roll Blondie Baking Bar Mix.

I love reviewing any baking mix. As an added bonus, I’ve included pictures to help you along. Out of the box, there are three distinct steps: the cinnamon filling, the blondie, and the icing that goes on top.

But the key question is how does it taste? Fully baked this absolutely had the best attributes of both a blondie and a cinnamon roll. And all the components work together really well. Each bite is like biting into a soft blondie minus the chocolate chips. The cinnamon filling does act a lot like the filling of a cinnamon roll. While it has the texture of a blondie, you are getting the best of both worlds. While you could leave off the icing, it adds to the experience of the cinnamon roll component.

The directions are fairly easy to follow. You make the cinnamon filling first, followed by the blondie mix, then after baking the icing. If you need a visual guide on assembling this then I’ve included the pictures down below.

Minus cooling time, this was ready from start to finish in about 35 minutes. And yes, resist the temptation of icing a hot blondie, or else you’ll be left with a mess. I did debate not adding the icing, but it did add that final confirmation that this was a cinnamon roll too. Could you leave it off? Yes, but I do think it adds to it. But if you are concerned about your sugar intake then I understand.

My biggest disappointment here is that this is clearly labeled as a seasonal item on my receipt. This means it will either last until the end of the season or worse until the supply runs out. Some items do end up selling more quickly than others.

What remains to be seen is if you can get similar results by using their blondie baking mix which is on shelves year round with some minor modifications.

Trader Joe's Cinnamon Roll Blondie Bar Baking Mix is sold in a box, but it contains three separate plastic bags. This becomes unavoidable given the three parts that go into making these bars.

If you are more of a visual learner, he is what this looks like as you assemble it.

First, take out all of your ingredients. While you are doing that, preheat your oven to 325F.

Next, in a small bowl combine the softened butter with the cinnamon filling.

After that in a larger bowl, you'll crack open your eggs and beat them lightly. Then you will add your melted butter. Stir to combine and then add in your blondie mix.

Next, add dollops of the cinnamon topping.

With your knife press down the dollops of cinnamon and swirl.

Bake for 25-30 minutes. Your pan will make a difference here. Darker pans will cook more quickly than lighter-colored pans. Also, if you only have an 8x8 pan you will need 30 minutes.

Allow cooling in the pan. While you are waiting mix the final packet with some water.

And when this is all done and the icing has set, cut into squares.

And for those of you who want a closer look at this:

First, this is clearly labeled on my receipt as a holiday or seasonal item. That means it is a limited-run item. This item is sold at Trader Joe's stores.

Would I buy this again? Yes, I would buy Trader Joe's Cinnamon Roll Blondie Bar Baking Mix again. This is one of those items that I wasn't sure was going to be successful but it totally works and is an excellent combination of favorite items. My only disappointment is this is listed as a seasonal item. For $3.99 this is well worth the money. 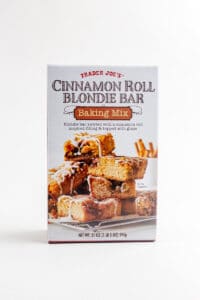