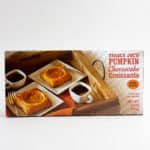 Sometimes, mashups of favorite dessert items really work. And yes, Trader Joe's Pumpkin Cheesecake Croissants did taste like both classics. Recently I tried the new Cinnamon Roll Blondie Mix and it seems they are making some pretty darn good combinations.

So yes, there is the mashup of two classics here.

As far as the croissant layer goes, this is more similar to items they’ve done in the past where there is a dollop of topping on top of a square of croissant dough.

The croissant is going to look very flat coming out of the package and unlike other croissant options at Trader Joe’s, this requires no rising overnight.

The croissant took a while to puff up. I did leave it out while the oven preheated. I have an electric oven, so it took a little longer to get to 350F. But in under 30 minutes, it was golden brown.

Mine had nice layers although I could have left it in the oven a bit longer.

And then the pumpkin cheesecake was a generous amount which only grew taller in the oven. This did eventually fall after cooling and it ended up looking more like the image on the box.

But the pumpkin cheesecake was filling and nicely spiced. It was sweet yet had all the familiar spices from pumpkin pie spice. It managed to be both warm pumpkin spice along with the sweetness of the cheesecake. It was balanced and delicious.

Combined, this was a tasty breakfast treat (but could also be a tasty dessert as well).

Now, be warned, there are only two of these in each package, this is a limited-time product. This item costs $3.99. Not a bad deal when you consider how much it would cost to get one of these out. And this wouldn't be bad paired with some ice cream or pumpkin seeds as well.

A good combination that is very well done.

This product is packaged in a box that contains two individually wrapped croissants.

This item is found in the frozen section and is only available in-store. This is also a seasonal and limited-run product that will only be around for the Fall and perhaps even the Winter season.

Would I buy this again? Yes, I would buy Trader Joe's Pumpkin Cheesecake Croissants again before the season is over. They were a nice size and both elements were good. And for $3.99 they made for a pleasant dessert.

The nutritional information, ingredients, and directions:

After being baked you get: 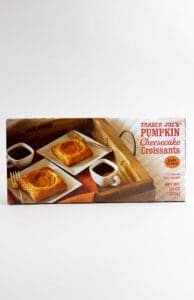 Trader Joe's Pumpkin Cheesecake Croissants is one of the many seasonal items available for the 2022 fall season.