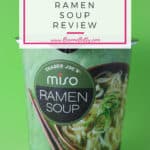 Since I started shopping at Trader Joe's back in 2016, I always wondered: why don't they have any ramen. If they are inexpensive, then that is the hallmark of inexpensive foods. And in fact, even though my husband and I are both grown adults and not of college age, we still keep ramen around. However, we tended to get our ramen from our local grocery store, H-Mart.

I mean you can get 4 packs of noodles at the grocery store for about $1. I can't really think of anything else you can eat that cheaply. Granted, it doesn't win any awards for nutrition, but at least your stomach will feel full.

Now, this isn't the cheap plastic-wrapped package of ramen. This has its own bowl for you to fill with water.

This particular item is labeled as being vegan even though it is cut off in the picture.

In terms of taste, it tasted like miso soup. And though miso isn't always vegan, it was close enough to the familiar taste where I did not feel like anything was missing.

Like so many noodles in a cup items, this does have a decent amount of sodium to it. But it didn't taste overwhelmingly salty.

The noodles cooked up in the appropriate amount of time. And once cooked, they were filling. You could bulk up this bowl a bit further by adding protein to your meal like tofu or chicken. It would even benefit from some additional fresh greens.

There were even bits of seaweed and green onions in some bites, but not too many.

It's a pretty good cup of noodles. It has the familiar taste of miso. It's vegan and doesn't make you feel like you are missing anything. It was filling. It was inexpensive at $1.29.

If you need a good grab-and-go lunch it wasn't a bad one to reach for at all. I'd bring my own protein to make it a more substantial meal, but otherwise, it seems well done.

Now, just a side note. I purchased two of these. As I'm typing this, it is the second one I've had. The first one was photographed. My second bowl of noodles did not have the oil packet.

Not a huge deal, but something to keep an eye out for. Did I miss it? Not really.

However, if you aren't near Trader Joe's, you can also find this on Amazon through third-party sellers.

A closer look at the broth:

Would I buy this again? Yes, I would buy Trader Joe's Miso Ramen Soup again. It was filling, tasty, and had a reasonable amount of taste (and sodium) for a bowl of prepackaged ramen soup.