The cons: The dragon on this bottle looks for more menacing than the one on the green dragon sauce, but the green brings more heat.

The verdict:  I got the chance a couple of years ago to see Alton Brown in a show called Eat Your Science. For the record, it's completely worth it to see him live. One of the topics in his opening monologue involved two of his pet peeves: the farm to table movement and Sriracha sauce. He mentioned that unless the restaurant is on a farm, this movement should be renamed the farm to truck to table movement. The other peeve is the overuse of Sriracha.

He wasn't kidding about this. For a long stretch on almost any Food Network competition, someone reached for the familiar bottle of red sauce in dishes ranging from appetizers to desserts. Alton did mention that if he ruled the world, he would limit all individuals to one single bottle of this stuff per year. I guess he's consumed his fair share I guess.

It's amazing how one little bottle of sauce has come to be the go to hot sauce where only a few years ago you might have a bottle of Tabasco or Frank's on the shelf. Now, I have almost as may hot sauces as open containers of jelly in my refrigerator.

Now, the natural comparison point is the most popular brand of Sriracha, the one with the red rooster on it. But I can tell you for certain, while the bottles look similar they are not duplicates of one another. I know that trader Joe's is best known for occasionally passing off Trader Joe's branded item that is likely a relabeled product from a different manufacturer.

In terms of thickness, this is much thinner than the Rooster sauce. That's probably a good thing as you won't end up in a mouth full of fire. This sauce also is not nearly as hot as the Rooster sauce either. This tastes more of garlic than the chili it is made out of.

For $2.99 this is priced similarly to the Huy Fong's Rooster Sauce. Not a bad sriracha at all. It's a good introduction to sriracha sauce, but if you have tried the Huy Fong's then you may still prefer the original. If Trader Joe's is the only place you shop, then it is still a solid option. 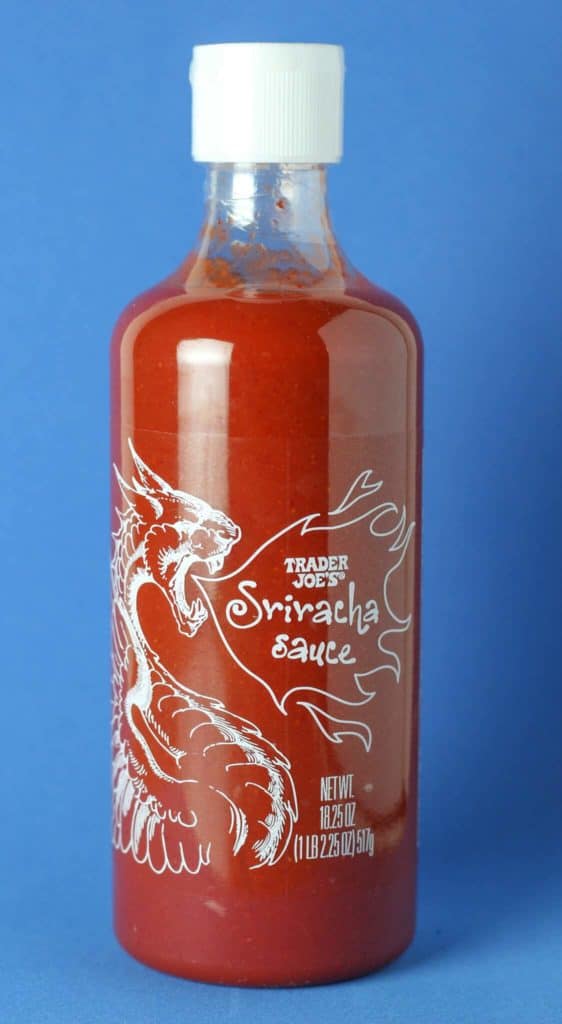