The holidays are a time when I get my cinnamon fix. Maybe because the weather is cooler, the oven is on more often, and it’s time for the autumn and winter spices that many are so familiar with. I’ve always wondered why Starbucks doesn’t add more cinnamon flavored items rather than just pumpkin. I mean pumpkin everything. Maybe I’m the only white girl who does not want pumpkin everything. Maybe that’s just me.

One of the things I looked forward to most are to Mom’s cinnamon rolls. She only makes them twice in any given year. August is clearly not the month I would get them. Does not mean that I don’t crave them. But cinnamon rolls are not something you can make on a whim. No, the ones in the refrigerated section of the grocery store pale in comparison to the real ones.

So, it’s time to look at alternatives in the breakfast arena: Waffles.

There are two types of waffles you can make depending upon how much time you have:  You can use freezer waffles, or any old waffle recipe you have laying around. This Betty approves of which ever makes life easier and tastier.

Which ever you chose, it’s the toppings that make this recipe. It’s a great alternative to maple syrup or butter. Sometimes the best foods are the familiar ones with a twist. It’s changing up the little things may make this a favorite. 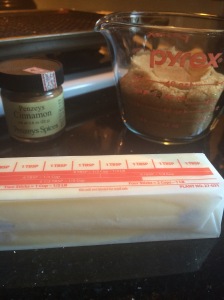 1/2 stick or 4 Tablespoons of butter

Now, put the cinnamon topping over the waffles and then the cream cheese icing and enjoy! If you have someone who says “it’s too sweet” or “I don’t like things that aren’t salty.” Go back to the waffle mix- If you have bacon bits or precooked crispy bacon that can be chopped finely, then add it to the mix for the salty and sweet combination.

Enjoying these recipes? Check out the rest of the food page