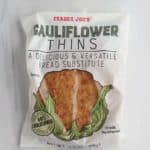 If I've had any complaints about the variety of food offered it tends to be only one: too many carbs/sugar. Well, perhaps Trader Joe's is finally going to get on the low-carb bandwagon with this product. Behold, yet another way Trader Joe's is sneaking cauliflower into their products.

Now, my mom is on the Keto diet. And yes, that is a really low-carb diet. So whenever we dine together we need to make every carb count. Or was that count every carb? No matter because with this bread substitute you are only getting 1 net carb per serving.

My biggest concern was how much it would taste like cauliflower. You see cauliflower isn't exactly my favorite flavor in the world. But I like it when it gets mixed in and plays a supporting role.

So if it is the bread you are looking to banish, then this is a pretty darn good substitute as long as you are willing to pony up $3.99 for the four pieces in this small package.

This is pricey for what you are getting.

But price complaints to the side, you'll also need to look a little harder for this too. It isn't located with the bread products either. This is hiding out in the refrigerated aisle.

But assuming you are willing to shell out the money for this and you can find it, this is a pretty solid substitute for bread.

Its texture isn't bread-like, but it serves a similar purpose. I used this as something closer to a substitute for tortillas and pita bread.

And to be honest, I didn't miss the bread here. It still had a decent bread-like texture. But it added a taste and texture were a little more on par with an omelet with the flavors of egg and parmesan cheese overpowering the cauliflower.

So I appreciate Trader Joe's trying to be more inclusive of the low carb folk.

How much are Trader Joe's cauliflower thins?

These cost $3.99 and four small thins come in a pack

How can I enjoy these?

You can make the into mini pizzas, grilled cheese, sandwich bread, or even as a bread replacement.

But there is something here that even the people who aren't low carb can eat and enjoy.

Would I buy this again? Trader Joe's Cauliflower Thins are a yes for me, but aren't going to be a staple. I think with just 3 ingredients I'm going to look into making this at home, especially for the price.

The nutritional information and ingredients

Trader Joe's Cauliflower Thins is a new cauliflower product that you might walk right past without even realizing it.