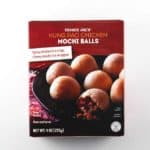 On my most recent shopping trip, I picked up a few essentials (after waiting in line but walking into a fully stocked store) and brought home enough groceries to last a bit when I came across Trader Joe's Kung Pao Chicken Mochi Balls.

In an effort to continue some semblance of normalcy, I'm back. And reviews will continue. I might be digging through some pantry items in between, but a bit of normal is good for everyone who feels cooped up inside for the time being.

So I picked up a whole bunch of freezer food for easy meals. Being in the house still means that my job expects me to show up. But it also means I don't want to cook as often either.

So my feelings toward mochi tend to be all over the place. There were times I really liked it and times I thought it was kinda gross. However, this was my first truly savory application of mochi.

Knowing that I had a lack meal of leftovers in the refrigerator as a backup plan, I made this little box of mochi balls.

And even though I don't love mochi, this was actually pretty good.

Now, be warned, this seemed far more of a medium heat than other items. And the filling didn't quite look like it did on the box either. It was paler in color but the ratio of filling to mochi outside here worked.

There is a lot going on here in terms of flavor: there is a good punch of ginger and garlic along with bites of water chestnuts for texture. It isn't too saucy or too dry either.

I found each bite to be relatively pleasant. The mochi was both crisp and sort of chewy. And while I made these in the toaster oven and air fryer would work just as well.

And realistically, this box is about 2 servings. But the heat totally slowed me down on these. They reheated fine the next day if you don't have someone to share this with.

For $3.99 these won't break the bank. So if you are stuck in the house or practicing some social distancing, these are a good try.

Would I buy these again? Yes, I would buy Trader Joe's Kung Pao Chicken Mochi Balls again. It was a pleasant surprise to see how well mochi goes with a savory filling. 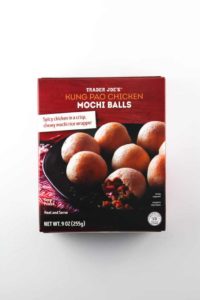